High above Earth, several United Federation starships are locked into a desperate battle against a Borg cube. On the bridge of his ship, Worf hears a grim damage report. His blood boils and he slams a console with furious fists. “Perhaps today is a good day to die,” he growls, before barking an order to his surviving crew. “Prepare for ramming speed!”

This post is loaded with massive (and high velocity) spoilers for Star Wars – Rogue One, A New Hope, Return of the Jedi, and The Last Jedi.

The above sequence with Worf fighting against the Borg, by the way, is from Star Trek First Contact. It’s not a spoiler because it happens in the first 5 minutes of the movie!

Collisions between spaceships in fiction are often some of the most dramatic moments. Either someone’s making a tactical decision, and even a heroic sacrifice, or an enemy ship has been disabled and is being weaponised to take down another enemy ship. In any case, it’s always a game changing event, and rightfully so. Written well, this can make for one of the most memorable moments in a story. The truth is that, certainly in sci fi, ramming always works as a battle tactic. In fact, the movies only get one thing wrong. They don’t make it work effectively enough!

As a naval tactic here on Earth, ramming is a time honoured move. From ancient battleships equipped with bronze rams, to World War II naval tactics, the effectiveness of crashing into your opponent is well known. And that’s without even adding any extra explosives. The kamikaze pilots did, which was a big part of what made them terrifying.

But let’s go back to sci fi. Actually, this happens quite often in both Star Trek and Star Wars. It really does make sense too, that the same tactic would work. You see, it’s all about kinetic energy. Any object in motion has kinetic energy equal to;

Where m denotes mass and v denotes velocity. In other words, how heavy something is and how fast it’s moving. All very intuitive really. In fact, this is fundamentally how most projectile weapons work. Bullets, for instance, do damage purely by hitting things at high speed.

But we’re talking about spaceships, and spaceship velocities are very high by necessity. A bullet travels at around the speed of sound, roughly 340 m/s (metres per second), but to escape from Earth’s gravity, a rocket heading into orbit needs to travel at 11200 m/s! Earth orbits the Sun at around 30000 m/s. Things involving space are dramatically faster than anything you’re used to here on Earth. In sci fi, people generally have this covered – but that effectively means that everyone in your favourite sci fi universe is calmly piloting a weapon of mass destruction.

For the sake of comparison, here are the energies (in Joules) associated with a few things, from tennis balls to extinction-level impact events🍩.

These numbers give a little basis for comparison. Feel free to speculate about where the Death Star’s main laser would fit on this scale – both the single reactor ignition from Rogue One and the blast which destroyed Alderaan.

Let’s go back to Worf battling the Borg. If he’d gone for the heroic sacrifice option and collided with the Borg cube, would it have worked? Well, the internet is a wonderfully nerdy place, so I can tell you that ship he was commanding, the USS Defiant, apparently has a mass of 3.55 × 108 kg and a top speed of warp 9.982. That apparently works out at 5940.87 times the speed of light. Which is ludricrous. But ok.

If we assume that when Worf said “ramming speed” he meant “the fastest speed we can go” then the USS Defiant would smash into the Borg cube with 5.6 × 1032 Joules of energy! That’s ridiculous! Also, this is just the impact energy. Remember that in Star Trek, all Federation starships are powered by antimatter reactions, meaning there would be an antimatter explosion on top of that impact. I don’t know how much antimatter the Defiant is powered by, but I suspect that would be insignifcant compared with that impact energy.

Smashing into a planet with that kind of energy wouldn’t only be a global extinction event – that’s ten times as much energy as the impact which formed Earth’s moon! I don’t care how powerful the Borg are, or how many times they rammed ships into destruction themselves, I think it’s safe to say that the Borg cube would not survive Worf’s attack.

Looking at a slightly less egregious example, consider the X-wings in the Star Wars original trilogy (which apparently were T65-B X-wing starfighters).

X-wings had a mass of 10 metric tons, and while there’s no way to say how fast they were going in all those space battle scenes, we’ve seen them leaving Earth sized planets in the movies. Earth has an escape velocity of 11.2 km/s, so let’s go with that for the sake of argument.

At that speed, an X-wing would have 6.27 × 1011 J of energy. And in some of the larger battles, they often got shot down and/or collided with the larger capital ships. At that speed, a colliding X-wing would do over 10 times as much damage as the US army’s infamous MOAB, and about as much as a small tactical nuclear warhead.

Assuming an A-wing isn’t too different from an X-wing in mass and velocity, this explains why Arvel Crynyd’s sacrifice at the end of Return of the Jedi managed to take down a Super Star Destroyer.

So what about in The Last Jedi? Again, big spoiler warning.

So one of the climactic moments in Star Wars Episode VIII was, quite honestly, among the most stunning cinema moments I’ve ever experienced. The silence in the movie soundtrack echoed the complete silence in the cinema auditorium, except for a couple of astonished gasps. The thing is, I could see exactly what was coming – partly due to some great acting from Laura Dern and partly because I’ve been meaning to write this article for some time – but that didn’t detract from the scene’s impact one bit. Errr… no pun intended.

At a pivotal point, the Resistance’s Admiral Holdo decides to sacrifice herself to save the fleeing resistance survivors. Piloting the now abandoned Mon Calamari cruiser, the Raddus, she barrels straight into the pursuing First Order cruiser at light speed. The resulting collision vapourises the Raddus, reduces several First Order ships to scrap, and cleaves Snoke’s immense capital ship, the Supremacy, clear in two. Her single action is ultimately what saves everyone – and given that the Supremacy is also the headquarters of the First Order, this is a major victory for the Resistance too. 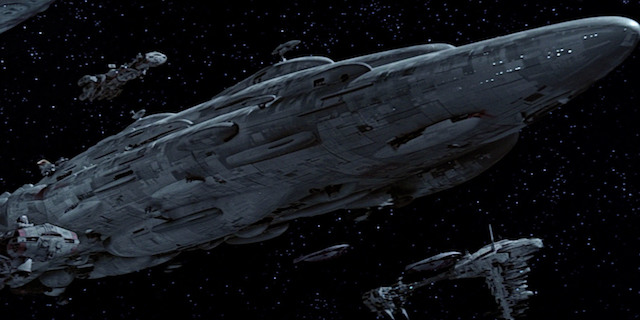 A star cruiser wouldn’t need to be quite as light and manoeuvrable as a fighter craft like an X-wing, and wouldn’t need to be lightweight like an aircraft. A naval battleship might be a fair approximation, so let’s assume the Raddus has a similar density to an aircraft carrier here on Earth. Working the numbers and making some loose approximations⚓️, an aircraft carrier works out to have a density of around 600 kg/m3.

Using that density with the dimensions given by Wookieepedia, the Raddus weighs in at an estimated 6.73 × 1011 kg, or about 0.6 billion metric tons. Not unreasonable for a starship 3.4 km in length. As for it’s speed, it’s difficult to say. In the Star Wars universe, “lightspeed” is a slang word for travelling through hyperspace and the actual speed of that is always handwaved⭐️. Let’s just assume that at the moment of impact, the Raddus was literally travelling at the speed of light.

At that speed, the Raddus would release about 3 × 1028 J of energy in a collision. That’s 30000 times as powerful as the asteroid impact which wiped out the dinosaurs! Realistically, that kind of energy wouldn’t just slice the Supremacy in two, it would probably vapourise most of it. I guess what we saw was the tip of the iceberg, and most of the explosion happened in hyperspace.

In fact, even at 0.1% the speed of light (around 550 km/s), that star cruiser would still be able to give you the same energy as an extinction event. Obviously, crashing your very large spaceship into an enemy vessel is not something to be taken lightly. Even in a post scarcity economy, a starship would take a lot of resources and time to build.

But as a last resort, ramming your opponent with your own ship is a hilariously effective tactic. I’m just saying!

🍩 Yes, that is an actual doughnut among the numbers. Interestingly, a doughnut contains almost half as much energy as you’d find in a kilogram of TNT. Thankfully, doughnuts are a lot less likely to detonate.

🌋 Well, Krakatoa hasn’t always been this glam. It was a still little hill once…

☄️ When you realise that 99942 Apophis hitting Earth would deliver twice the punch of the world’s entire nuclear arsenal, you start to realise why people were concerned about it. While the probability of such an impact is vanishingly small, the eventuality apparently can’t be ruled out.

🚀 Honestly, foreshadowing with the name of the ship itself is pure genius. For anyone who doesn’t get the reference, Admiral Raddus was the ship commander in Rogue One who took down an Imperial Star Destroyer by crashing another one into it, knocking out the planetary defence field in the process.

⭐️ I’ve seen a couple of debates now about whether Holdo’s gambit would work in universe because of hyperspace not being real space and blah blah blah. I’m just going to assume, given the close range, that the Raddus didn’t have time to properly enter hyperspace before colliding with The Supremacy, so it was still capable of interacting with things in real space. Also, I like calling it Holdo’s Gambit. I’m going to call this kind of thing that from now on.

A trope is a recurring theme in any narrative which conveys information to the audience. These are snippets of information which have somehow ended up in our collective subconscious as ways in which storytellers have gotten their points across. Overused tropes end up as clichés.

This article includes images from Star Trek: First Contact, Star Wars: Return of the Jedi, Star Wars: A New Hope, and Star Wars: The Last Jedi. All images are used here for the purposes of review, criticism, and education in accordance with Fair Use/Fair Dealing policies.

Molecular astrophysicist, usually found writing frenziedly, staring at the sky, or drinking mojitos.
View all posts by Invader Xan →
This entry was posted in astrotropes, Sci Fi. Bookmark the permalink.