An Uncomfortable Truth About Spacecraft

Since Juno’s arrival at Jupiter, a lot of people have noted how impressively technology has improved, with Juno being powered by solar panels. Indeed, without the progress we’ve made, Juno wouldn’t have been possible. It may not be immediately apparent to everyone, seeing as solar panels are so synonymous with satellites, but they’re one of the most distinctive things about Juno. No craft has ever been sent to the outer solar system before with solar panels as their energy source.

Solar power is an abundant source of energy on Earth, but a spacecraft at Jupiter receives only about 4% as much solar energy as one in Earth orbit does. Juno’s solar panels are huge, and would harvest 12-14 kW of power in Earth orbit. Out by Jupiter though, they only produce a meagre 486 W. Which is why all previous spacecraft were actually powered by nuclear isotopes. Sadly, this fact makes the future of spacecraft visiting the outer solar system rather uncertain. 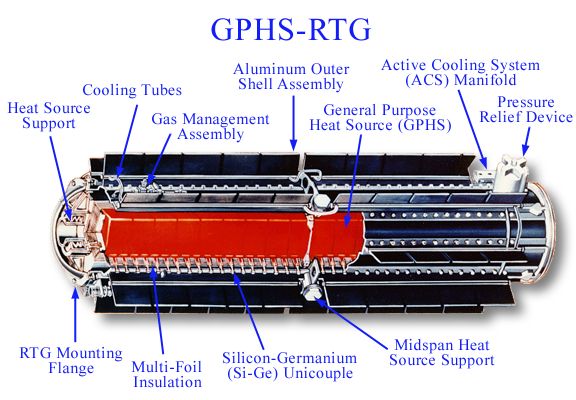 They’re quite ingenious devices really. An RTG is a generator with no moving parts at all. Instead, it’s filled with a well chosen radioisotope. As that isotope decays, it produces heat, and an array of thermocouples surrounding the hot material convert that heat directly into electricity using the Seebeck effect★. These are such a convenient way of generating a sustained amount of power that the Apollo missions used several of them, and the Soviet Union even found uses for them here on Earth. Sounds pretty useful, right? The trouble is that there are only a very few radioisotopes which work effectively in an RTG. The one traditionally used produces enough power that it can easily glow red hot using only its own internal heat. Plutonium-238. 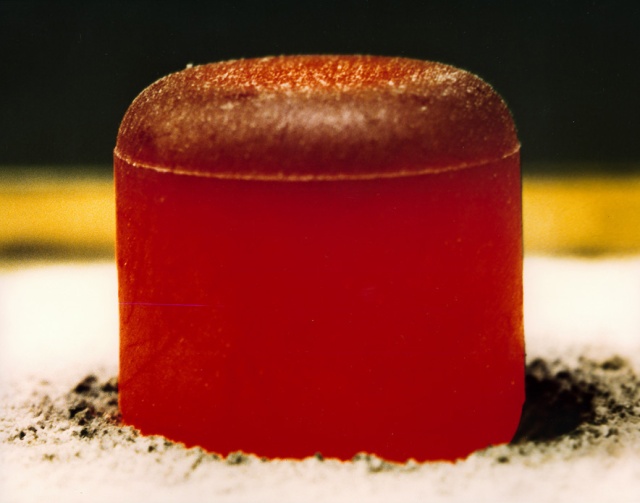 Plutonium is an almost entirely human-made element. It’s technically the heaviest naturally occurring element, but only ever formed in trace amounts as uranium-238 naturally captures stray neutrons.  And, quite rightfully, plutonium has a bad reputation. While certain politicians may like to bemoan the general badness of uranium, plutonium is much more scary. Back during the anxiety-inducing days of the Cold War, when everyone was inexplicably obsessed with nuclear weapons, one thing which nuclear reactors were producing was Plutonium-239 (Pu-239). This is the frightening weapons grade material which… well. This is a subject which keeps me up at night, which is best left for another time. The thing is, nuclear reactions are a bit like chemical reactions in that they almost never produce just one product. Most nuclear reactions tend to give byproducts.

One byproduct of the reactions to make Pu-239 is Neptunium-237 (Np-237), and if you irradiate Np-237 you can produce the very useful Plutonium-238 (Pu-238). In fact, a lot of the Pu-238 produced for power sources also contained a fair percentage of Pu-239. In other words, the power source for all the deep space exploration NASA has ever done was actually a direct consequence of the US and Soviet military producing nuclear weapons. Which is a sobering thought.

Plutonium can keep providing a spacecraft with power for a long time♣︎. Voyager 1 for instance, now classified as an interstellar mission, was launched in 1977 and is not expected to finally run out of power until 2025. It left carrying 37.7 kg of Plutonium (a schematic for Voyager’s RTG is shown to the right here) which gave it an initial power output of 470 W. As of 2015, that had dropped to about 255 W.

Mercifully, the world is producing less Pu-239 now. For decades, humans realised that having enough nuclear weaponry to extinguish all complex life on Earth’s surface and phrases like “mutually assured destruction” were probably bad. The thing is, just like the Plutonium being carried by Voyager 1, the Plutonium that stayed behind is also decaying and is gradually producing less and less useable power for RTGs. In short, as a species we’re running out of Plutonium.

NASA, of course, are well aware of this problem. In 2008, NASA Administrator Mike Griffin explained in no uncertain terms, “After [Curiosity] launches, we’re effectively out of plutonium.” Since then, dwindling reserves in the US have been supplemented by remaining reserves in Russia. Unfortunately, NASA only has about 35 kg of Plutonium left to work with. Only about 17 kg of that stockpile is still good enough to be used in RTGs, and that’s been reserved in its entirety for the next Mars rover mission, currently scheduled for 2020.

So what’s to be done?  In 2013, the US Department of Energy (DoE) reactor pool at Oakridge started making Plutonium again for the first time in decades, but it’s going to take the best part of a decade before enough Pu-238 is produced to actually be useable. The DoE stance is that they’re producing enough for currently projected NASA missions and that there’s no current shortfall, but this has been rightfully criticised as circular reasoning – of course NASA aren’t going to plan anything using energy sources they don’t currently have.

Meanwhile, the DoE are researching new production methods, presumably because they’re no longer tied to methods for making weapons grade materials. Or perhaps as a way of actively not making such materials. One method they’re researching involves using pellets of pure neptunium oxide.

Another option may be to use a different nuclide. Unfortunately, the requirements are quite specific. The nuclide used in an RTG needs to be have a long enough half life that it provides consistent amounts of energy for a suitable amount of time, while also decaying rapidly enough that it gives out a useful amount of energy. That energy also needs to be a useful type. Alpha emission is ideal, while beta and gamma ultimately require heavy shielding. For spacecraft, it also needs a good energy density (energy output per kg) given that when you’re trying to send something as far away as Jupiter and beyond, every last gram really does matter.

Sadly, out of the 905 known nuclides with half lives of over an hour, only about 30 are known to meet these requirements and be suitable for use as spacecraft fuel. Most of them decay much more rapidly that Pu-238 too, meaning that while they provide a good source of energy, they won’t be effective for the long timescales required for long distance space travel❉. Additionally, none of them are safe to use with as little shielding as Pu-238.

While it’s not impossible that we may still discover another good isotope for use in RTGs – or better, a different type of power source altogether – for now, it looks like Plutonium is the best we’ve got.

Looks like we’d better keep those reactors running a little while longer.

★ For anyone who knows a little about how solar panels work, the thermocouples in an RTG actually work in a very similar way. Essentially, you take two metals at different points in the galvanic series and join them at two places. The electron energy levels shift differently in the two metals, with the result being an electrical current. More sophisticated designs actually use n-doped and p-doped semiconductors, making them even more similar to solar cells.

♣︎ As you might expect from such a massive element, Pu-238 is a prolific alpha emitter. The heat it generates comes from its rapid decay into U-234, and with the alpha decay being the dominant mechanism, there are relatively few complications like chain reactions and unwanted byproducts. Alpha emission is also not very penetrating, so Pu-238 powered RTGs don’t require as much shielding as some other isotopes might.

❉ Flying long haul to Neptune is a killer.

Images:
Schematic of one of NASA’s general purpose RTG units.
One of the plutonium pellets used in Cassini’s RTG.
Older design of RTG used in the Voyager probes.
DoE image of a 250g sphere of plutonium-238 (IV) oxide.
New Horizons before launch, with its RTG on display.

Molecular astrophysicist, usually found writing frenziedly, staring at the sky, or drinking mojitos.
View all posts by Invader Xan →
This entry was posted in chemistry, physics, Tech and tagged elements, space exploration, spaceflight. Bookmark the permalink.
%d bloggers like this: