This is not a delicious 台湾水餃子 (Taiwanese boiled dumpling) drifting through space, no matter how much it may look like it. It is, in fact, one of Saturn’s moons! This is Pan. A tiny moon, only 35 km in diameter, and the second closest to Saturn itself.

As you might expect from such a tiny moon, no one even knew it existed until we sent a craft there. It was first photographed by Voyager 2 in 1981, but wasn’t actually discovered until 1990 when those images were being reexamined. Part of the reason for this is because it’s so small, and part of the reason is because of where it is.

Pan, you see, is a shepherd moon – one of a handful of tiny moons which help maintain the shape and structure of Saturn’s rings. Pan orbits in the Encke gap, a 325 km wide space in Saturn’s A ring which is free of the icy, dusty particles that make up the rest of the ring system. The reason the gap exists at all is because Pan sits there, sweeping up all of that material.

It’s also the reason why Pan is such an odd shape. That weird ridge around its equator is made up of accreted ring material. As Pan orbits, any and all stray bits of ring material which end up in its path ultimately find themselves sticking to Pan’s surface, and because Saturn’s rings are so perfectly planar, they form a surprisingly neat ridge around Pan’s middle. 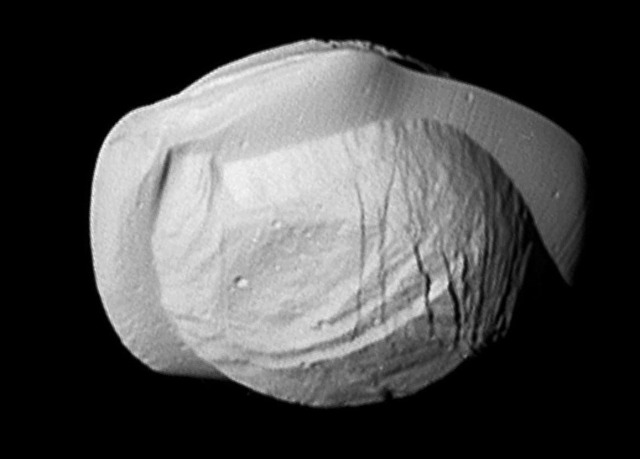 That ridge is also what makes it look so much like an errant space foodstuff. Whether you see an empañada, a gyoza, a piergoi, or a ravioli, of course, probably depends on what you personally prefer to eat. Interestingly, it’s a common feature of  shepherd moons, with another of Saturn’s moons – Atlas – also having a similar equatorial ridge. If you’re curious to learn more, planetary scientist Carolyn Porco has two journal papers about it for you to read, available here and here.

Of course, that funny looking ring of material gives it more than just a passing resemblance to its parent planet Perhaps it just wants to be just like Saturn when it grows up. How adorable!