The Planet Quandary I – The Sacred 8

So this is the first part of my series of analyses and perspectives on the ongoing planet debate. Honestly, I can’t believe it’s been like, a decade already. Which is probably the main reason I’m going into some detail on this. Admittedly, the scientific community at large is somewhat infamous for spending a long time ruminating over things. Not least because, whether or not they admit it, a lot of scientists don’t really like change★. Ironic but true.

Anyway, this first in this blog series is largely in reaction to a post by Ethan Siegel on his blog, Starts With a Bang. If you have a few minutes, you may want to go and read it – I’ve been reading Ethan’s writings for several years now. He’s great at explaining things from the ground up, and his articles are well structured without skimping on the detail. However, in this case, I think he’s wrong.

This concerns the definition of planets, and what does and does not constitute a planet, scientifically speaking. I’m also going to reiterate what I said in my introductory post that Pluto is not the point here, even if I may use it as a convenient example.

The full definition given by the IAU of what a planet actually is is… complicated. I’ll go into more detail on that in my next article. For now, I’m just going to concentrate on one thing. A principle outlined in a paper by Margot (2015) which gives a line in the planetary sand, demarcating what is and is not a planet.

My own redrawn version of this figure is here:

(There’s a larger version with all my annotations here.)

Seems fairly clear, doesn’t it? Anything above the line is a planet. Simples! This is essentially a function of whether or not a planet has “cleared its orbit” of other material – things which haven’t aren’t allowed to be planets.

Trouble is, this is a paper written in 2015 to justify a decision by the IAU in 2006. To my knowledge, situations such as this are rather prone to confirmation bias. Particularly when devising a rule so carefully tailored to our own Solar System. In fact, it’s interesting how firmly people want to hold the belief that there are 8 planets in the Solar System and absolutely no more. The sacred 8. A highly exclusive club, from which all vagrant small round objects are banned.

My biggest problem with this definition and its mathematically defined line in the space sand, is that it isn’t constant. The definition of an object changes, dependent on where it is exactly. And call me old fashioned, but I like my definitions to be… well… definite.

To reiterate: The definition of what an object is changes according to its location. 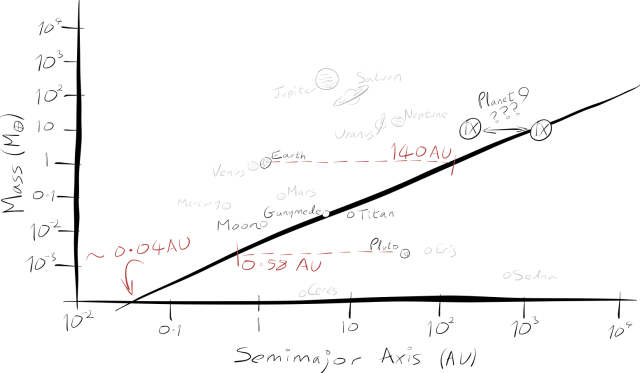 If you move a planet to a different orbit, it will transform into a different object. Yes, this is a mathematical consequence of this definition. And it has a number of ramifications… 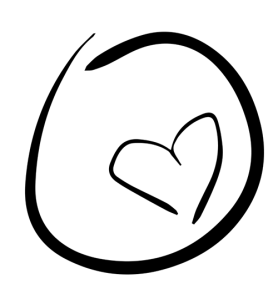 If you were to move Earth to an orbit greater than ~140 AU from the Sun, it will cease to be a planet. While this admittedly is unlikely to happen, barring a cataclysmic event, it has implications. Earth-sized planets are typically considered unambiguously to be planets, seeing as we live on one. But by this definition, if we find any Earth-sized objects out beyond the Kuiper Belt, they may not be planets.

Meanwhile, if you were to move Pluto inwards to an orbit somewhere between Mercury and Venus, it would be a planet. Which seems to contradict the “Pluto is too small” argument that so many people always seem to make.

The not-a-planet line actually crosses the x-axis in this graph around 0.04 AU, which means that literally anything orbiting inside that line may be a planet – even tiny objects like Ceres, Enceladus, or a comet which is at hydrostatic equilibrium❉. For the record, according to NASA’s small body database, there are over 1420 objects which pass closer to the Sun than 0.04 AU. Of course, these don’t dominate their orbit in terms of mass. But their presence does call into question whether or not Earth’s orbit should be considered “cleared”.

It’s worth also considering the moons of the Solar System. If Earth’s moon was orbiting the Sun at the same distance Earth is now, it would be considered a planet. Meanwhile, if Titan were orbiting the Sun instead of Saturn, it wouldn’t be a planet, despite being larger than the Moon. If we were to replace Jupiter with its moon Ganymede (more massive than Titan), it would be just barely too small. It misses the planet line by between 0.008 and 0.011 Earth masses, depending on whether it’s at perihelion or aphelion.

In fact, given that planetary orbits are elliptical by definition, this means that anything orbiting too close to that magic line may be a part-time planet, achieving planethood once every orbit when it’s fortunate enough to be sufficiently close to its parent star. 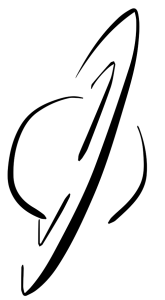 This has some interesting implications as well, for people hunting for the elusive “Planet 9“. Formerly known as Planet X, but now it wouldn’t be number 10. Interestingly, it may not always be number 9 either. Planet 9, if it exists, is predicted to have an elliptical orbit with a perihelion of 200 AU and an Aphelion of 1200 AU (which is why it’s shown in two places on that plot up there). Checking this against Margot’s magic planet line, it turns out that this is just enough to be a “planet” for its entire orbit.

It suddenly feels a little suspicious that Mike Brown, who goes by the rather unsubtle twitter name of @PlutoKiller, predicted this as Planet Nine’s most distant point. I have to wonder what will happen to this definition if it turns out that Planet Nine is slightly further away. Will people start to rethink this definition if the Solar System contains an object which ceases to be a planet once per orbit?

On a final note, Margot’s line in the sand is touted as being scalable and applicable to any star/planet system. So I did what anyone else would to investigate this. I downloaded the entire NASA Exoplanet Archive to take a look. 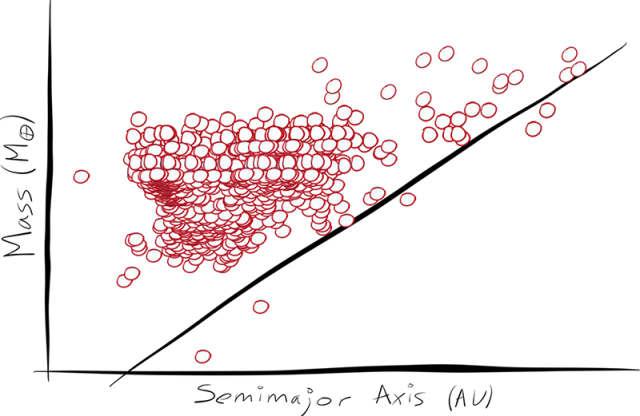 Out of a total of 3485 listed records, I found 1070 objects with known mass, orbital semimajor axis, and host star mass✿ – mass of the host star was important to scale things so I could plot them on the same graph. Turns out, the overwhelming majority of these are indeed “planets” by the IAU definition. Though as anyone who works in exoplanet detection will tell you, our methods are biased overwhelmingly to detect things which are either very large or very close to their parent star. Below a certain size and above a certain orbital semimajor axis, we’re largely blind.

All the same, there are a few outliers on that plot. The low mass ones are pulsar planets, which everyone always forgets about anyway. But there are undeniably two super-Earth sized planets in the data which aren’t allowed to be real planets under Margot’s definition. In addition, two Jupiter-sized planets are borderline cases which may be only part-time planets depending on how eccentric their orbits are.

As I always say, a good hypothesis will become stronger the more you try to break it. Unfortunately, the way I see it, the IAU’s definition of a planet has cracks in it. It seems strong at first, but it has weaknesses.

My prediction is that as our telescopes improve and the planet hunters keep doing their thing, we’ll start to find more and more objects which are inexplicably not allowed to be planets.

Perhaps then, everyone might consider a better definition. In the meantime, I’ll let Mars here describe my feelings on the matter.

★ It’s fair to say that every change, major or minor, that’s ever happened in science hasn’t been without its opposition. In my opinion, this is not necessarily a bad thing. I’ve been, at various points, on both sides of the debates. Sometimes, it can stimulate much needed discussion and conversation, but other times it can stand in the way of progress. It’s a double edged sword.
❉ Consider also that very hot things tend to melt, and that liquids reach hydrostatic equilibrium very easily. Water droplets, for instance, are at hydrostatic equilibrium. Taking this to its most ludicrous extreme, a small globule of molten glass in a circular orbit around the Sun at 0.02 AU would be classified as a planet if there was nothing else orbiting there.
✿ By the way, it wasn’t included in the archive, but the mass of PSR B1257+12 is believed to be about 1.4 solar masses.

Molecular astrophysicist, usually found writing frenziedly, staring at the sky, or drinking mojitos.
View all posts by Invader Xan →
This entry was posted in astronomy, space and tagged planets. Bookmark the permalink.

4 Responses to The Planet Quandary I – The Sacred 8