Ceres may just be one of the most underappreciated places in the entire solar system. For a long time it was only considered an asteroid, not even worthy of being mentioned in school textbooks. Which may be why I love that NASA’s Dawn mission has given us such beautiful views of our nearest dwarf planet.

Here are a few gorgeous shots of the tiny place. Some details on what each image contains are included in the captions. Click any one to view them in an image carousel.

If there’s one thing Ceres is not short of it’s craters. As you might expect, with no atmosphere to protect it.

A moody shot of Cerean craters falling into shadow at the terminator – the boundary between Ceres’ day side and night side.

Beauty shot of Ceres, showing both Occator crater with its two bright spots, and the curious Ahuna mons (just on the edge of the limb to the right).

A region near Samhain catena, this was taken during Dawn’s lowest orbit – one of the closest views we have of Ceres’ surface.

This image shows several of the different kinds of terrain on Ceres’ surface.

The rim of Kerwan crater, the largest on Ceres. It shows a patch of bright material, one of many on Ceres, thought to be a salt deposit. 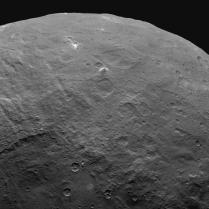 Ahuna mons, the tallest mountain on Ceres. This feature is unique, and is believed to be a cryovolcanic dome. 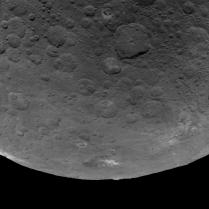 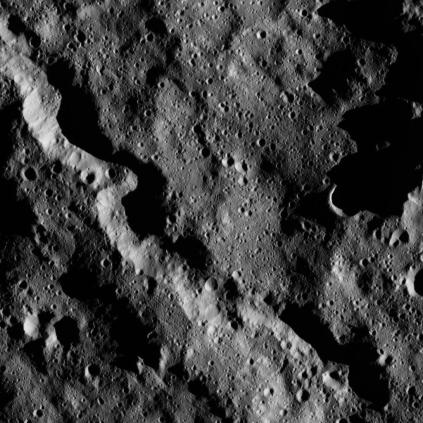 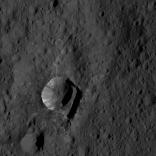 Oxo Crater, found to contain water ice. The streaky insides of this tiny crater look quite similar to the sides of Ahuna mons.

Closeup of the bright spots in Occator crater. They’re thought to be salts, either MgSO₄•6H₂O or Na₂CO₃, and may have been created by hydrothermal activity.

A gorgeous shot of Occator crater against the limb of Ceres. 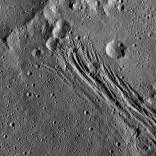 Ceres has stretch marks, and they’re part of why she’s beautiful. These canyons are thought to have been caused by extensional stresses pulling the surface of Ceres apart. They appear newer than some of the craters in the region.

Molecular astrophysicist, usually found writing frenziedly, staring at the sky, or drinking mojitos.
View all posts by Invader Xan →
This entry was posted in astronomy, space and tagged Ceres, planets. Bookmark the permalink.

1 Response to Postcards from Ceres