8 things we know about Proxima b

Proxima b is exciting, isn’t it? I mean, it’s a planet which was born to a different star. An actual alien planet. And it’s so tantalisingly close! If our species were to actually work towards it, we could conceivably send a robot probe there and hear back within our lifetimes! Just imagine that! 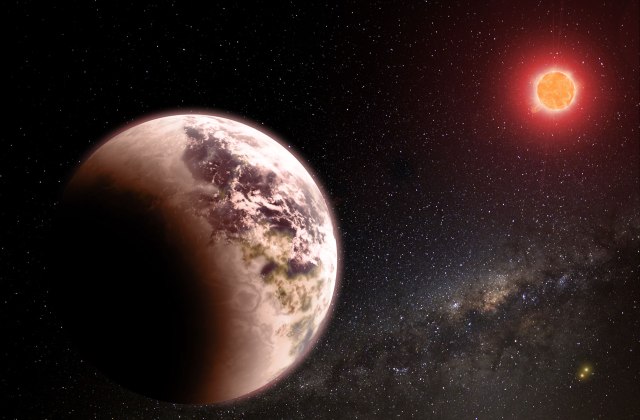 Unfortunately, while this means that our final frontier seems just within reach, we really don’t have a clue about what Proxima b may really be like. Of course, we all like to daydream about a planet with liquid water and balmy temperatures where strange but familiar alien life lives. But there’s a very good chance it may not be like that at all.

Proxima b may have acid clouds and crushing pressures like Venus. It may have oceans of liquid ammonia on a night side which never sees the red sunlight. It could be a carbon planet with rivers of tar and mountains of diamond. Maybe instead of liquid, it has supercritical oceans. Headlines blurting our speculations and ideas range from suggesting it could be an ocean planet to saying it’s probably a desert planet.

In other words, we actually know very little about our nearest neighbouring exoplanet. So for now, here are 8 things we do know about it…

It’s no Neptune, but it’s still definitely more massive than our homeworld. Proxima b was found using the radial velocity method – by looking for wobbles in the motion of Proxima itself. Unfortunately, this leaves some uncertainty as to Proxima b’s exact mass – the estimate depends on Proxima b’s orbital inclination compared to the direction we’re seeing it from.

At the low end of the scale, it’s at least 1.27 Earth masses. That’s the minimum estimate, so it’s likely to be heavier than that. About 90% of possible inclinations suggest it’s under 3 Earth masses. While “Super-Earth” planets aren’t a well defined class, there’s a fair chance that Proxima b could be our nearest example of one.

Based on mass estimates, Proxima b is likely to be at least 1.1 Earth radii in size, if it has the same density as Earth. Lower density and higher mass would both mean it would be larger.

2. You’d have a lot of birthdays there

As I showed in the model I made before, Proxima b is very close to its tiny host star, compared to the distance between Earth and the Sun. Earth’s orbit has a semimajor axis of 1 AU by definition (it actually varies between 1.016 and 0.983 AU because of the ellipticity of Earth’s orbit). Proxima b has an orbital semimajor axis of just 0.0485 AU. Which means that a year on Proxima b lasts only 11.1 Earth days.

Interestingly, the tiny size of Proxima is made up for by the much closer orbit. With an angular size of almost 0.8°, Proxima would appear a little larger in the sky of Proxima b than the Sun does on Earth, at roughly 0.5°.

Being so close to its parent star, gravitational forces are likely to vary enough that Proxima b would be tidally locked – with one side staring constantly at direct red sunlight, and the other side trapped in a perpetual winter’s night. It’s difficult to say what effects this may have on a planet, and on who or what may potentially be living there. Photosynthesis may be less efficient under a red dwarf because of the lower energy at the red end of the spectrum, though this may be offset if the sunlight is constant. Any life would not have a day/night cycle and therefore no circadian rhythm as we know it. Proxima b’s inhabitants might have evolved not to sleep at all.

Alternatively, there’s a chance that Proxima b may fall into a spin-orbit resonance similar to Mercury in our own Solar System. This is more likely with a more eccentric orbit, and all we know about Proxima b’s orbit is that it’s below 0.35. This gives it the possibility of a 3:2 spin-orbit resonance, which would cause a day length of about 7.5 Earth days.

4. You may need to wear sunscreen

Proxima Centauri is a red dwarf, and red dwarfs barely emit any ultraviolet, so sunburn as we know it would not be a concern on Proxima b. It also gets only 0.65 times as much stellar flux as Earth, so sunlight shouldn’t be too hazardous, right?

Unfortunately, Proxima Centauri has something quite a bit worse. Like many red dwarfs, it’s a flare star. In fact, it’s a rather active one, flaring up quite frequently. How this would affect the surface of orbiting planets is difficult to say, but without a dense atmosphere and strong magnetic field, a planet’s surface would be highly irradiated.

Here on Earth, our atmosphere protects us from the Sun’s x-rays, and Proxima b, being more massive than Earth, is likely to have a denser atmosphere. On the other hand, it has to contend with stellar wind pressures nearly 2000 times as powerful as those the Sun puts out. The consequences of orbiting an angry dwarf. This means that, at least for now, we can’t even be certain if Proxima b has an atmosphere at all.

Proxima Centauri is about 4.85 billion years old, compared with the Sun’s 4.6 billion years. Assuming no huge differences in planet formation, this means that Proxima b may be a couple of hundred million years older than Earth. While it’s impossible to be certain of this without actually going there, the two planets are certainly in the same age range.

The habitable zone – defined as the region where liquid water may exist on a planet’s surface – around Proxima Centauri is expected to be at radii between roughly 0.0423–0.0816 AU. With Proxima b’s distance of around 0.0485 AU, this puts it in the warmer end of the range. If it does have an atmosphere, liquid water is quite likely to exist on its surface.

After all, water is the 3rd most common molecule in the Universe (after H₂ and CO). In our solar system, it’s quite abundant – from the surface oceans of Earth to the subsurface oceans of Europa to the icy mountains and cryovolcanoes of Titan. There’s no particular reason to expect that water should be any less abundant anywhere else.

7. It could be quite pleasant

Astronomers at the European Southern Observatory (ESO) have suggested that, provided Proxima b has an atmosphere and surface water, it could be quite comfortable by human standards. Calculations have shown that an atmospheric N2 pressure of just under 1 atmosphere and a CO2 pressure of 0.01 atmosphere should be sufficient to keep the sunny side of the planet ice free.

In fact, a denser atmosphere would help to transfer heat from the planet’s sunlit side to its night side, potentially making much more of the planet habitable. Titan, for example, has a surprisingly dense atmosphere, and the day side/night side difference there is only around 1.5 K, despite having a day which lasts for just under 16 Earth days (the same as its orbit, being as it’s tidally locked to Saturn).

8. It may have a very different chemistry to Earth

Life, fundamentally, is born out of chemistry, and chemistry around stars is determined by three things – what’s available to make molecules from, which molecules are formed, and which molecules are destroyed. Interestingly, all three of these things may be different around a red dwarf like Proxima.

The first consideration is metallicity, which is astronomy jargon for how many elements heavier than Helium a star contains. Proxima has a much higher metallicity than the Sun, which means it’s quite likely that everything in orbit around it does too. This would give a very different set of lego bricks for chemistry to use as a basis. Secondly is the energy emitted by the star itself. Being a red dwarf, Proxima has a very different spectral energy distribution (SED) to the Sun.

Take these two things together and you find yourself with rather different chemistry. The lower energy in the starlight means that reactions which need higher energy to happen, won’t happen. It also means that molecules which would be rapidly fragmented in the UV from the Sun would be able to persist quite happily in Proxima’s red light. But then, there are those huge flares, which throw an extra spanner to the works.

Once again, it’s difficult to predict what exactly the difference may be, but there’s a good chance that planets orbiting a red dwarf like Proxima may have a rather different chemistry to what we’re familiar with.

Images
Artists impression of Proxima b – created with a background photograph by R. Scott Hinks.
Comparison of Proxima b with Earth – Earth image from NASA’s Blue Marble 2002
Artists impression of a flare on Proxima – created with CME images from NASA SOHO
A permanent ocean sunset on Proxima b – manipulation of my own photograph
Photomanipulation includes screenshots from Shadow of Morrowind Skyrim mod
Cropped, annotated version of  an image by Skatebiker/Wikimedia Commons

Molecular astrophysicist, usually found writing frenziedly, staring at the sky, or drinking mojitos.
View all posts by Invader Xan →
This entry was posted in astronomy and tagged 8 things, planets, stars. Bookmark the permalink.

1 Response to 8 things we know about Proxima b