Ceres is a fascinating little world. The Empress of Asteroids. The little planet that couldn’t. A tiny, primordial remnant from the early days of the solar system, full of answers to questions, and new questions to be answered. And now, carbonaceous material has been discovered there! I’m quite enamoured with Ceres, as I am with discussions about astrobiology. However, that doesn’t change one big fact – discussions of life on Ceres are vastly premature. 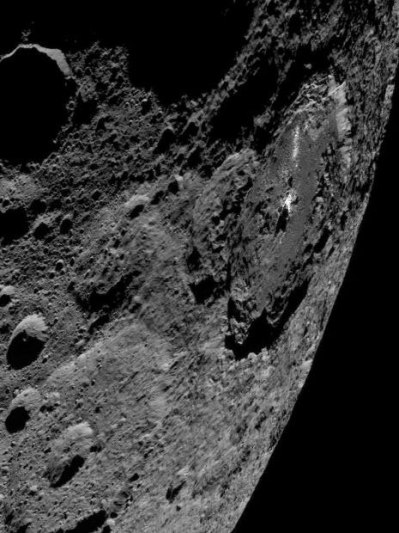 In a feeding frenzy of the kind which should surprise absolutely no one who understands how the news media works, the past several hours have seen numerous reports from sources across the globe about how Ceres “contains the building blocks of life.”

Of course, this is something we’re always excited about. Another object in the solar system added to the list of things which might support life would be quite a discovery. That said, I’m loath to be the burster of bubbles but, to me, making claims like that seems to be quite an excessive leap in reasoning. It’s far too early to be able to speculate.

The thing is, chemically speaking, what we’ve found on Ceres is about as far from being the building blocks of life as a bucket of molten plastic is from being a set of Lego bricks. But that doesn’t make it any less interesting.

NASA’s Dawn spacecraft has been busily surveying the surface of Ceres with spectrometers to see what delicious molecules it can find lurking on the surface. I haven’t found a copy of the journal paper to read yet, but as far as I can tell, Dawn found alkanes. A kind of hydrocarbon made up of long chains – shorter chains are found in things like petrol, longer chains are found in things like candle wax. New Scientist lays the facts out quite cleanly:

The identity of the tar-like minerals can’t be pinned down precisely, but their mineral fingerprints match the make-up of kerite or asphaltite. The constituents and concentrations of these organic materials suggest that it’s unlikely they came to Ceres from another planetary body.

Now for a start, tar-like substances make up a huge amount of the carbon-containing material we’ve seen on other planets. It’s either that or carbon dioxide, typically. Tholin, for instance, is a tarry substance which is found everywhere from Titan to comets. But what we have here are minerals. Asphaltite is bitumen impregnated rock and kerite is a rubbery material made from bitumen and sulfur (I’m not a geologist, so if I’m wrong here please do correct me). Bitumen is the heavy tarry stuff to make roads – American English speakers probably have instantly recognised the word asphalt.

No, we did not find alien roads either. No matter how cool that would be. 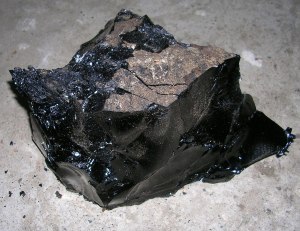 Admittedly, this is less exciting than “the building blocks of life” for most people. Though bitumen does contain a fairly interesting collection of organic compounds. Mostly saturated hydrocarbon chains, but with an eclectic assortment of aromatic hydrocarbons and heterocyclic compounds. And given that things like DNA do contain heterocyclic aromatics, yes these are what we could consider to be prebiotic molecules – in other words, while we have no idea how life formed in the first place, we think that if you take molecules like these and leave them in the right place for a few million years, life might happen.

There is mounting evidence that the clays and carbonate minerals found on Ceres were processed in warm water at some point in the distant past. They’ve certainly been chemically altered by water – hydrated minerals actually contain chemically bound water molecules. And yes, this does suggest that the bitumens we’ve seen on Ceres may have been processed the same way. Given how little we know about the way life formed, it’s impossible to say what may have formed on Ceres, or how long it was simmering. Unfortunately, we need more evidence before we can place too much confidence in our speculations. It’s still a long stretch from prebiotic molecules to Cerean microbes in the same way that finding iron ore in the ground is not evidence of cars.

The fact that Ceres is full of carbonaceous mineral goo is still rather interesting. In a sense, I suppose it’s a gargantuan carbonaceous chondrite meteor. Chondritic meteors have long been known to contain prebiotic molecules. Even amino acids, though these have not yet been seen on Ceres (at least, to my knowledge). So an interesting fact we can learn here is that the solar system appears to be full of prebiotic molecules. That does suggest the inevitability of life, given the right conditions.

The biggest news here, to me, is that Ceres is far from being just a boring round rock. It’s a complex little world, with deposits of various raw materials. We’ve found mineral deposits, water ice, and now hydrocarbon deposits.

This is also the first time carbonaceous material like this has been found on an object in the asteroid belt, but it suggests we may be able to find more elsewhere. This kind of thing is very promising if we’re looking at the future potential for constructing habitats in the asteroid belt, or mining asteroids for resources – two things which may ultimately be a good idea if we’d like to ensure the continued survival of our species.

The sweet spot where they found all this carbonaceous material was Ernutet crater, which seems to have an abundance of it. 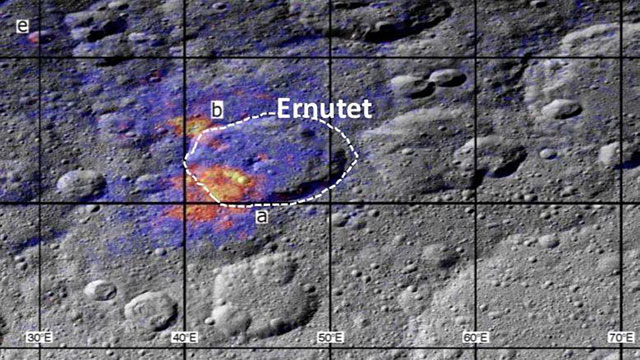 Personally, I’d love it if they were to find some actual evidence of life on Ceres. That would be wonderful, wouldn’t it? But I’m not overly fond of jumping the gun. I’m sure talking about life gets news pages a lot more clicks than talking about minerals, so I can see why this happens, but in a way that’s a little sad. Discoveries should be interesting because of what they are, not because of what they aren’t yet.

Interestingly though, while we haven’t found life just yet, technically we did strike oil. Bitumens are made of very similar stuff to tar and crude oil found here on Earth – though the stuff on Ceres didn’t come from long dead animals. Being essentially a big collection of heavy petrochemicals, bituments can be refined into synthetic crude oil. Whether telling the US government that there’s oil on Ceres will encourage them to send people there remains to be seen.

Molecular astrophysicist, usually found writing frenziedly, staring at the sky, or drinking mojitos.
View all posts by Invader Xan →
This entry was posted in astrobiology, space and tagged Ceres, planets. Bookmark the permalink.