It turns out, Pluto has blue skies. And water ice on its surface. Which, at a cursory glance might make it seem a little bit like home. But only a little bit.

Some notable experts were a little puzzled to find that at first, Pluto appeared to have no haze. One of the most knowledgeable people to listen to about hazes on small worlds is Sarah Hörst, an expert on Titan, who seemed rather puzzled at the idea that Pluto may be haze-free. From its night side though, Pluto reveals its hazy goodness. 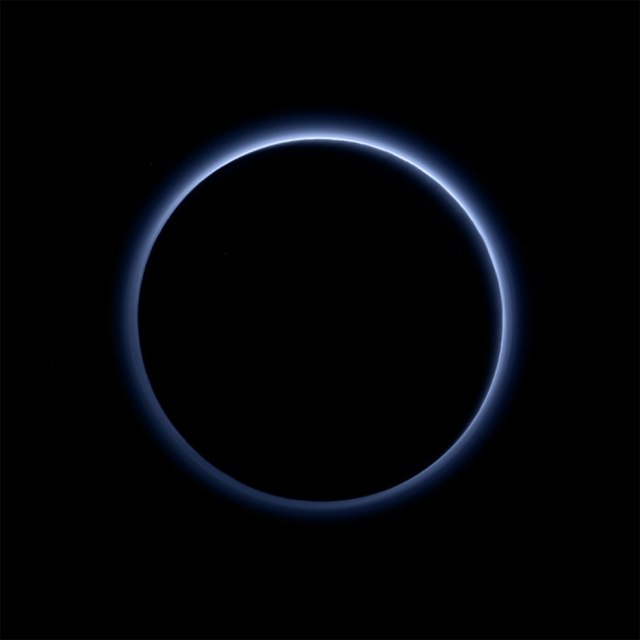 This image is about as close to true colour as you can get. The glow comes from a deep layer of haze which swathes all of Pluto, and yes, it’s a lovely indigo blue colour. It looks strikingly like the haze in the upper atmosphere of Titan, and is quite probably made the same way. Hazes form when nitrogen molecules and small hydrocarbons are bombarded by ultraviolet in a planet’s upper atmosphere. They form into carbonaceous particles made of tarry material called tholin which then proceeds to fall back down to the planet’s surface. Here on Earth, the same thing happens over cities to form smog.

Look closely at the images of Pluto’s atmosphere and you’ll even see striations in the haze, showing different atmospheric layers. It’s really rather fascinating!

Haze on Pluto means that the tiny world has a rich, active chemistry going on, which is something I’d very much like to know more about. Hopefully we’ll learn more as New Horizons continues sending back data.

For the record though, the blue colour is due to the fact that tholins tend to be an orangey red colour (which is why Titan’s clouds are that beautiful orange colour). As a result the tholin particles in the atmosphere scatter red/orange light away. It’s the reason for the reddish colour of the little planet’s surface. While Pluto’s atmosphere is too thin to see this normally, when seen in silhouette, the sunlight passing though the atmosphere has very few red photons left in it so you see blue haze. The fact that martian dust does something similar is why sunsets are blue on Mars.

In other words, Pluto may seem to have blue skies, but it doesn’t. And the blue you see in that picture up there shows skies which are not actually blue like Earth. Actually, they’re blue like Mars!

This twilight Pluto image has been colourised by myself. The original was gorgeous but grayscale. There’s another version out there, but I think mine’s slightly more accurate…