A very interesting thing has been reported this week, provoking a lot of discussion and speculation on Twitter and elsewhere. A star in the Kepler catalog, designated KIC 8462852, appears to be orbited by a bizarre swarm of objects and no one can figure out exactly what they are. Remarkably enough, the idea of alien civilisations and megastructures is being given some serious consideration. Well, that and some despair and a healthy amount of skepticism.

This image is the light curve of WASP 28b, a gas giant planet, as it passes in front of its stellar host. It’s as symmetric as you would expect, and it causes the starlight to drop by a small but noticeable 1.5%. Gas giants don’t get much larger than this, even if you pile on the mass, and smaller planets cause correspondingly smaller drops in light. All very simple.

Not so for KIC 8462852. The paper submitted this week shows some light curves and they are all over the shop. Take a look… 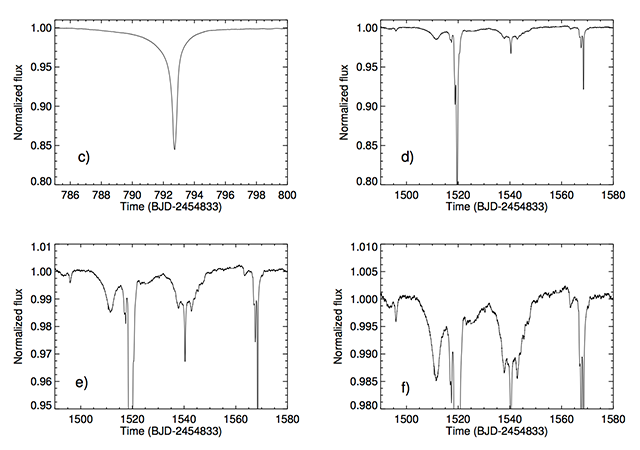 As you can see, these are some pretty weird light curves. I see asymmetric objects (top left panel) and clumpy material (bottom two panels) here, though some of these transits look fairly symmetric too. And some of them cause the starlight to dim by over 20%! So what exactly could cause this?

It’s not planet forming material, because this is an old star and by now any of that would’ve, well, formed into planets. My knee-jerk reaction (one which, it seems, I’m not alone in having) was that this is debris from some kind of huge impact. But that doesn’t fit. An impact would cause a lot of dust around the star, causing a huge excess of infrared light. But there’s no excess infrared being emitted from this star (though some not-entirely-explained patches of debris have been found elsewhere purely at radio frequencies).

Another leading possibility is that it’s a swarm of comets in orbit. Comets do start to puff out a lot of gas when they warm up (the fully extended coma of a warm comet can be about three times the size of Jupiter!), and if there were a lot of them, it may explain the clumpy appearance of these light curves. Taking a look at some spectra from this star during transits could probably prove or disprove that hypothesis. Dust will preferentially scatter light at particular wavelengths. Also, comets are full of molecules and those molecules start to shine brightly when comets warm up. So brightly that there are molecular emission lines named after them – the C₃ molecule was actually first seen in comet spectra. With enough comets to cause a 20% drop in starlight, I’d expect lines like those to show up in the spectrum. However, there would need to be a lot of comets. Alhough a red dwarf companion star lurking nearby may have disrupted enough from the star’s Oort cloud to cause a huge infall, that idea still has problems of its own (depending whether it’s actually a binary companion or just passing through). It’s a possible explanation, and quite a good one, but this hasn’t stopped some sources from already stating it as fact.

The, also premature, discussion going around twitter (stoked somewhat by news outlets) is slightly more exotic. Though I have to say that it’s not entirely infeasible that these weird light curves may be due to alien megastructures. 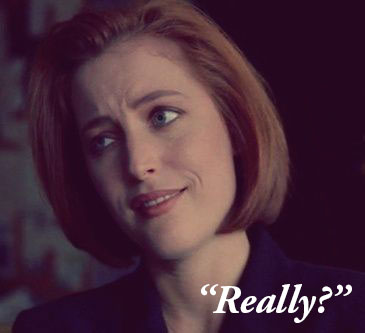 I know, I know. The moment you even mention the word “alien,” a number of people will immediately start grumbling and shaking their heads. But let’s consider this rationally. Scientifically speaking, we must consider all possibilities. In the words of Conan Doyle, once you eliminate the impossible then whatever remains, no matter how improbable, must be the truth. Additionally, by Occam’s razor, the simplest possible explanation is the most likely – specifically, the explanation which requires the fewest assumptions of unknown phenomena. In this case, all of the proposed explanations require at least one such assumption. Various ideas have been put forward, but none are without their problems. The Bad Astronomer has a pretty good discussion on this, which I’d advise you to have a look over if you’re interested.

So given that an alien civilisation is actually not much more significant an assumption than an unprecedentedly massive barrage of comets or a coincidental and mysteriously dust free collision, the idea is actually being given some serious consideration in a hypothesis paper recently submitted to the Astrophysical Journal. Also, I should stoically point out that no Oort cloud has ever actually been observed, meaning that both Oort clouds and alien civilisations have exactly the same amount of direct evidence proving their existence. I suspect that statement will earn me no friends, but it’s worth remembering.

In the words of Tabetha Boyajian, lead author from the detection paper, “Aliens should always be the very last hypothesis you consider, but this looked like something you would expect an alien civilization to build.” This paper, which I won’t elaborate on right now, discusses a number of possibilities for astroengineered megastructures, and the prospects we may have for finding these things in transit studies designed to look for planets. Which is rather interesting because, frankly, why shouldn’t we at least consider the possibility?

For now, I’ll leave you with a few words from Eric Mamajek. I caught his presentation during IAU2015 about the discovery of that planet with the gargantuan ring system, so he’s someone who you should definitely listen to on this topic…

Unnecessary to pull the #alien card on #KIC8462852 yet. Too much more astro followup to do to rule out star/plnt explanations #NotAliensYet

I'm sorry – I look at this #KIC8462852 light curve and it seems a bit unreasonable to see a Vogon Constructor Fleet pic.twitter.com/WtJAG9NZol