The weather here on our little blue world has, of late, been somewhat turbulent. Storms lash my hometown on the UK’s Southern coast, Australia slowly bakes under oppressive heat, North America is deep frozen by the errant polar vortex, and here in Tokyo we’ve seen the heaviest snow in over a decade. At this point, I think it would require some degree of active ignorance to still be denying climate change on our world. Though while it may be little comfort to those of us plagued by violent weather, Earth isn’t the only place in the galaxy which has chaotic weather systems… 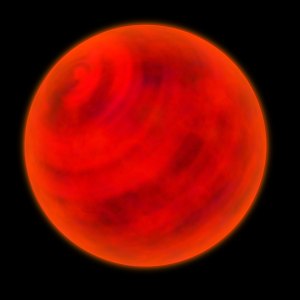 WISE J104915.57-531906.1B (mercifully nicknamed Luhman 16B) is a tiny brown dwarf star. A failed stellar ember which never caught aflame. At just 6 light years distance, this tiny gas-ball is right on our galactic doorstep, the closest brown dwarf to us. Close enough that astronomers using the VLT (Very Large Telescope) in Chile can actually see weather systems on its surface!

If you could sit and watch Luhman 16B through a telescope for a few hours, you’d see that its brightness varies a lot. It gets dimmer and brighter as the hours go by. Regular stars don’t work this way – stars which vary in brightness typically do so fairly predictably, and not nearly as quickly. The reason is that brown dwarfs have active weather systems, and the variations in brightness are because of clouds in the star’s atmosphere – not entirely unlike those here on Earth.

Well, I say not entirely unlike. They follow similar patterns, but the rains and snows on brown dwarfs are nothing like those on a planet like Earth. Instead of water, these clouds are made of hot silicates, salt, and molten iron. The snow on a brown dwarf is technically made of sand. And using infrared telescopes like the VLT, we can actually watch these curious clouds forming, growing, and dissipating. This was the principle used by a group of astronomers led by the Max Planck Institute’s Ian Crossfield to create a weather map for a brown dwarf star! Yes, you read that correctly!

And there it is! Ok, so it isn’t as detailed as the weather maps you might find on Weather Underground, but that’s still pretty amazing. Those three pictures you see there are maps showing the varying luminosity across the surface of Luhman 16B (there’s a video you can watch too). You’re looking at clouds in the skies of a star. Personally, I think that’s pretty amazing.

Apparently, using Crossfield’s techniques, you can even watch clouds and weather patterns move over the star’s surface. Astrometeorology could even become a new scientific field, as we learn how to predict weather patterns on these stars. This would tell us a huge amount about how things work on brown dwarfs, and younger gas giants (which appear to work in much the same way). After all, while we understand fairly well, the things which drive weather patterns here on Earth, weather patterns in a place so different as a brown dwarf must have entirely different mechanisms behind them.

It’s been known for quite a while now, that brown dwarfs have weather systems. Some are even expected to have one or more vast storms in their atmospheres, much like Jupiter’s great red spot. In fact, a study performed with the Spitzer space telescope, poetically entitled “Weather on Other Worlds” suggests that most, if not all, brown dwarfs are stormy little stars.

I’ve long been amazed by exactly how much detail modern technology can see at such huge distances. Amazed and excited. It looks like it won’t be too long before these mysterious objects elsewhere in the galaxy won’t be quite so mysterious anymore…

The Crossfield et al paper was published in Nature at the end of last month.

Molecular astrophysicist, usually found writing frenziedly, staring at the sky, or drinking mojitos.
View all posts by Invader Xan →
This entry was posted in astronomy and tagged stars. Bookmark the permalink.