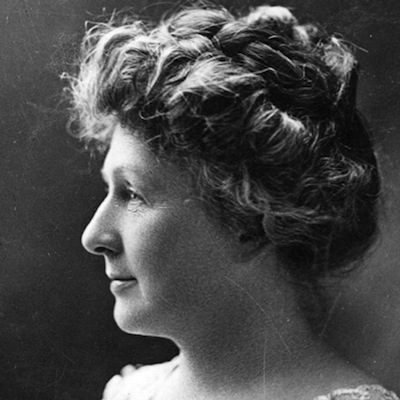 In honour of Ada Lovelace day, I thought I should write a little about a personal hero of mine. The lady in this picture is none other than Annie Jump Cannon, responsible for one of the most important and well recognised facets of modern astronomy.

Ask any astronomer what the difference is between a red star and a blue star, and they’ll happily explain to you how the colour of a given star relates to the temperature of it’s photosphere. Red stars, you see, are the coolest of the stars out there with surface temperatures of “merely” two or three thousand Kelvin. Blue stars, on the other hand, are at the other end of the scale with searing temperatures in excess of 30,000 Kelvin. Many might mention that stars are divided into a number of spectral types, dependent on their surface temperatures. I’d hope all of them would know of Annie Jump Cannon’s contribution to what they’re talking about.

You see, Annie was the creator of the Harvard Spectral Classification system for stars, a system through which stellar astronomers subdivide the stars they observe according to their temperatures and observed compositions. While it was devised back in the late 1800s, the system is still very widely used today.

Annie was one of a number of astronomers who worked at Harvard Observatory just before the turn of the 20th century. Popularly known as the Harvard Computers, the group contained a number of remarkable astronomers (including Henrietta Leavitt, who I’ve written about previously). In the late 19th century, Anna Draper set up a fund in honour of her late husband Henry Draper to catalogue the stars. Edward Charles Pickering, the director of Harvard Observatory had been given the funding to complete the task, so he hired several astronomers to work on it. One of those astronomers was Annie Jump Cannon.

However, as in any large scale scientific project, there was some disagreement over how to proceed. Their aim was to catalogue every star visible in the sky, down to a magnitude of about 9. I think it goes without saying that that’s a lot of stars! Two of the astronomers in particular had differing opinions. Williamina Flemming, who had been put in charge of the cataloguing work, favoured a simple and straightforward system so as not to cause too much confusion. Antonia Maury, on the other hand, favoured a more complex system which would be more comprehensive. It was Annie Jump Cannon who intervened with a compromise, taking the best pieces from each of their ideas. Her system used the strength of Balmer absorption lines – dark lines observed in the spectra of stars due to absorption by atomic hydrogen – to classify stars into 7 types, labelled O, B, A, F, G, K, and M★.

The system which Annie devised went on to be used for the Henry Draper catalogue which the Harvard Computers compiled. It’s such a comprehensive catalogue that it’s still widely used today by stellar astronomers. Many stars are known by their “HD numbers”, including several which I’ve studied myself. Of those stars, around 230,000 were catalogued by Annie. She also published several other catalogues of variable stars, including hundreds which she had personally discovered!

Remarkably, the travesty is that this exceptionally valuable work to astronomy was performed by a group of women who were working for just 25 cents per hour – less than that which was earned by university secretaries. From such humble beginnings, it was ladies like Annie Jump Cannon and the Harvard Computers who helped to win acceptance for women within the scientific community.

It’s sad that even now, over 100 years later, a gender gap still exists in physical sciences. In my experience, astronomy may be one of the more well balanced of the physical sciences but we’re still not there. Not yet. It is my firm hope that inspirational scientists like Annie and her colleagues can help to boost enthusiasm for any young women interested in science. They certainly proved, after all, that it’s remarkable what you can accomplish if you only try.

★ The most popular mnemonic which students use to remember this order is “Oh, Be A Fine Girl/Guy, Kiss Me.” Dependent on whoever you might happen to prefer kissing.

Molecular astrophysicist, usually found writing frenziedly, staring at the sky, or drinking mojitos.
View all posts by Invader Xan →
This entry was posted in astronomy and tagged scientists, stars. Bookmark the permalink.

1 Response to Counting the stars…