It’s always fascinated me that the mountains of Venus are capped with snow made of heavy metal minerals. Frosts made of shiny, lustrous material, giving a metallic glint to the tops of mountains hidden beneath kilometres of acrid cloud. I always thought it was such a poetic concept.

Specifically, those minerals are mostly lead sulfide (galena) and bismuth sulfide (bismuthinite) which sublime from the planet’s hot lowlands to be deposited on the mountaintops. Heavy metal snow. Venus is just full of underappreciated surprises. If you’re still curious, there’s much more to read here.

Really, Venus is just my favourite planet of this whole ragtag bunch of oddballs we call a solar system. While I may find Titan fascinating, be incredibly curious about Mercury, wonder what that weird red colour comes from on Jupiter and, of course, be rather fond of Earth… Venus just enthralls me. I don’t know entirely why, but I suspect it always will 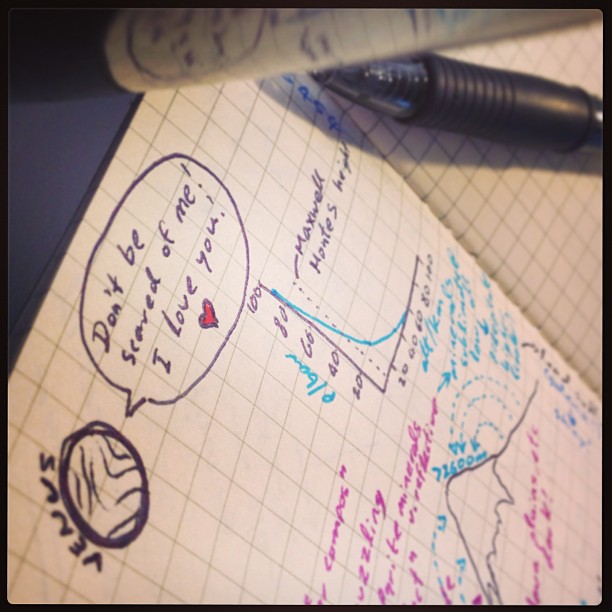 On an unrelated note, it bothers me somewhat that while virtually all surface features on Venus have female names, the tallest mountain on Earth’s sister world is named after a man. Perhaps it shouldn’t bother me, but it does. The tallest most dominant feature which, by necessity, is frequently referenced in  articles about the Venusian surface topography. I mean seriously, how masculine can you get?

Admittedly, Maxwell Montes (the 11 km tall, highest peak on Venus) is named for James Clerk Maxwell whose theory work underpinned the radar which allowed us to see beneath the Venusian clouds. But still… Personally, and with no disrespect intended to Maxwell, I’d move to rename it with the same convention as the other Venusian mountains. All of the mountains on Venus are named after goddesses. I rather think Juno Montes would be a much better name for it.

Irrespective of names though, it’s a pity that no one’s sent any probes below the clouds of Venus in over 30 years. I really do hope we go back sometime…

Molecular astrophysicist, usually found writing frenziedly, staring at the sky, or drinking mojitos.
View all posts by Invader Xan →
This entry was posted in space and tagged planets, venus. Bookmark the permalink.

7 Responses to I ♥ Venus