6 chapters and 2 appendices, 186 pages, 39 figures, and 52426 words later, the thesis was completed, bound, and submitted. And there was much rejoicing.

(Yes I am covering my real name. Pseudonyms and all of that. You know how it is.) 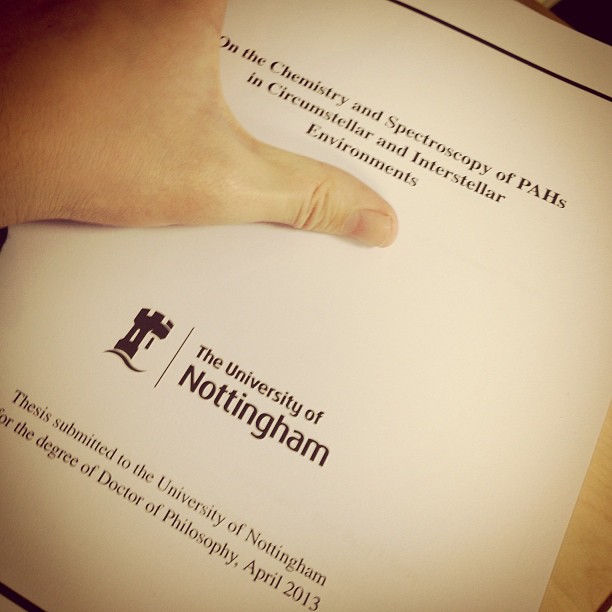 Writing the thesis is probably one of the most dreaded and forbidding things anyone will have to do on their path to becoming a scientist. I’d go so far as to say it’s a rite of passage. If you follow me on any other parts of the internet, you’ll probably know by now that I passed this particular rite about 2 days ago. And it’s remarkable how exhausted I still am.

Having one huge milestone ever present on your mind can become really quite overbearing. At risk of seeming melodramatic, you feel a little bit like Frodo carrying the ring of power at times. Except without any of the sword fights or that cool turning invisible thing★. Either way though, it’s done and dusted. Though I do still need to pass the viva voce exam (thesis defence, to those of you in the US), and I’ll probably have a bunch of corrections to do before I’m finished. Because pretty much no one passes first time without any corrections. For now, I’m going to quell the gnawing uncertainty that it’s all going to go horribly wrong somehow, and say that hopefully those will just be minor things. And now I have a big book full of research which may hopefully fuel a bunch of research papers♥. And research papers mean that I might, you know, be hired as a postdoc somewhere.

So anyway, I now have stuff to catch up on. And when I say stuff, I basically mean my entire life, which was largely neglected due to necessarily being an antisocial shut-in while finishing off writing the page beast. This may take a little while, so bear with me while I update… everything. I have much to write about, both here and elsewhere.

Also, I feel inclined to take a little me time now that I can. Get reacquainted with my poor neglected bass guitar, fool about with the paints and canvasses I have lying around, get a bit gastronomical again, make a few photomanipulations, and allow myself the blissful luxury of getting lost in a few good books. Recommendations are welcome, by the way.

I need to write here more. Personal entries on occasion, and research blogging posts. I suspect it might be useful to catalog exactly which hoops I need to jump through, indeed which hoops I’ve already had to jump through, while trying to find a postdoc. It’s something which many postgrads are eventually going to have to deal with after all, and it might be useful for some to read. There’s also a real possibility that I may be unsuccessful in this. Not everyone makes the cut. While I’d like to remain cautiously optimistic, I genuinely don’t know where things may end up at this point.

But then, life would be boring if we knew what was going to happen…

★ Also, there are no orcs. Well… Provided you avoid the student union bar when the rugby team is there, that is.

♥ In all seriousness, I can’t wait to actually publish some of this stuff because I personally think it’s really cool. I also rather like the fact that I actually think my research is cool, because a surprising number of people don’t seem especially enthused by theirs.

Molecular astrophysicist, usually found writing frenziedly, staring at the sky, or drinking mojitos.
View all posts by Invader Xan →
This entry was posted in academia, life and tagged student life. Bookmark the permalink.