Oh print me a home where the cosmic rays roam…

3D printing really is pretty amazing. By laying down successive layers of precursor material (typically liquid or powder), a 3D printer can create essentially any solid object, no matter how intricate. On the small scale, 3D printing technology has already been used to create fascinating pieces of geometric jewellery and houseware items. But… think bigger. Much bigger. 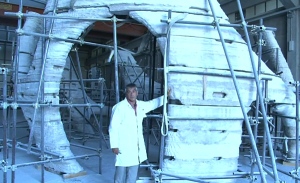 A brand of printer known as D-Shape (owned by Monolite UK and founded by Enrico Dini) is already developing technology to create entire buildings using 3D printing technology. The eventual intention is to create these buildings on-site in one go.

Apparently, these buildings take only a quarter of the time it takes to build regular buildings, provided they stick to rounded edges. Not only does this give them a beautifully organic look, but it also makes a lot more sense. After all, the only reason modern buildings are so boxy-looking is because of the methods used to construct them. The D-Shape printer works by using regular sand and a binding material, creating objects which are effectively made of sandstone. The material apparently has a smooth marble-like finish, and engineering properties comparable with concrete. In the future, bricks may become obsolete. Now, think even bigger.

A group of architects, the reknowned Foster + Partners amongst them, have teamed up with ESA to investigate the possibility of printing a Moon base. No, I’m not making this up, I promise. 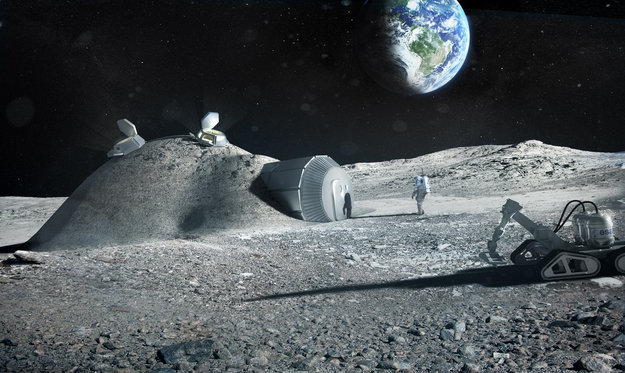 Their idea is to use Moon dust as a basis for 3D printing. Simply, they intend to create a weight-bearing dome; the walls of this will be made up of a honeycomb structure intended to shield the inhabitants from micrometeorites and cosmic radiation, while keeping the dome partially buried to help alleviate the dramatic temperature changes which occur on the Moon’s surface. The habitation area is intended to be an inflatable inner dome which can then be pressurised. 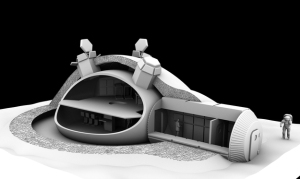 This really is a fantastically audacious idea, and one which I think shows a lot of potential. I mean, one of the big stumbling blocks of any plans to make a permanent human presence on the Moon is the prohibitive cost of transporting materials out there. 300,000 km is not exactly just down the street, and the prospect of getting entire buildings there from Earth isn’t really technologically feasible (remember how large the Apollo vehicles were, and how large the Saturn V rockets needed to get them there were!). Of course, it seems far more logical to gather resources while out there and use those. Needless to say, the Moon is unlikely to run out of Moon dust anytime soon.

The architects have already constructed mockups of the structure, and have tested smaller models inside vacuum chambers. All going according to plan, the eventual intention is to construct the first lunar buildings at the Moon’s South pole, where they’ll be bathed in perpetual sunlight – useful, seeing as solar power is abundant and easy to capture. 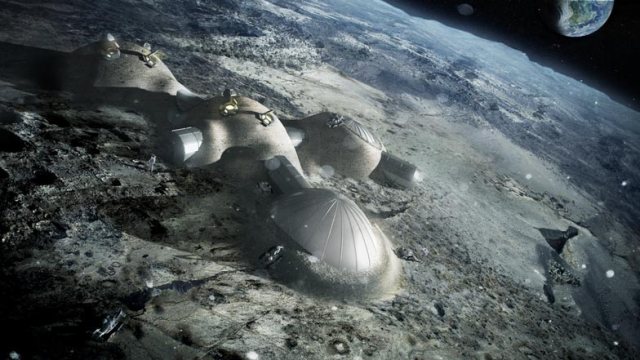 I genuinely wonder how long it might be until these plans become a reality. However, while constructing buildings seems entirely possible, the pragmatic part of my brain wonders how we might tackle certain other problems of lunar habitation.

Images:
Top via Technabob
Others via dezeen

Molecular astrophysicist, usually found writing frenziedly, staring at the sky, or drinking mojitos.
View all posts by Invader Xan →
This entry was posted in space, Tech and tagged space exploration, the moon. Bookmark the permalink.