As many a space enthusiast will tell you, the Sun’s closest neighbour in our galaxy is Alpha Centauri, visible as one of the brightest stars in the Southern skies. It’s a triple star system composed of two quite Sun-like stars fairly closely spaced, together with a rather more wayward red dwarf companion. And I for one, used to spend a lot of late nights as a little kid, wondering about whether there were planets in that system. Because obviously, barring the planets the Sun has in tow, any planets there would be the closest ones to Earth. The nearest true alien planets!

Well it turns out, that there is indeed a planet to be found there. It’s the smallest planet ever found around a Sun-like star, only slightly more massive than Earth. Mind you, there are unlikely to be exotic alien life forms on this starbaked little world, as it orbits Alpha Centauri B with a radius of around 6 million kilometres – much closer than Mercury is to the Sun. Even though Alpha Cen B is cooler and less massive than the Sun, it’s still likely to be a parched little ball of rock and iron.

All the same, bathed in the orange sunlight of its parent star, this little planet (which I suppose would be named Alpha Centauri Bb) is a fantastic discovery. It really goes to show how incredible planet hunting techniques now are. The planet was detected using the doppler technique, tracing tiny wobbles in the star’s motion caused by any potential planets. In this case, it being such a small planet, those wobbles are tiny (only 51 centimetres per second!) which needs  amazing accuracy to detect. Of course, the signal was very weak, and any other planets further out would have even weaker signals. I don’t think it’s overly optimistic to hold out hope that there may be at least one other planet in the Alpha Cen system!

The results are due to be published today in Nature, though a preprint copy is available, courtesy of those lovely people at ESO.

I don’t know what else to say right now other than… wow! This is actually the most exciting piece of astronomy news I think I’ve ever heard!

★ I’ve been reminded to curb my enthusiasm and point out that it is, in fact an Earth-mass planet, and not necessarily an Earth-sized planet. Which is a valid point. The actual size of this planet depends on other factors, such as its density. Thanks, @Astro_Gee. 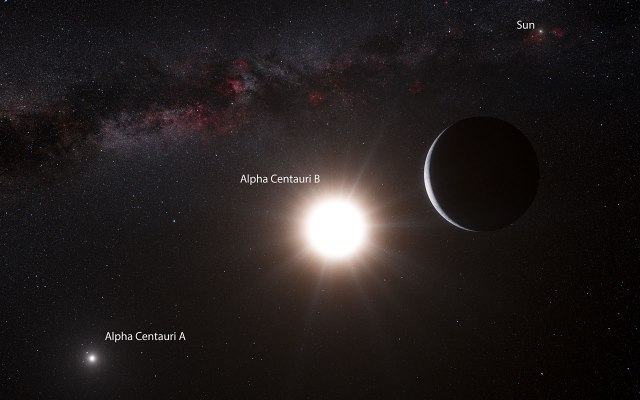 All images courtesy of ESO