Welcome, one and all, to another scintillating selection of spacey and scientific writings fresh from the blogosphere, for your enjoyment and perusal! This week’s flavour is very much centred around space travel – both manned and robotic.

Let’s kick off this carnival by taking a look back… John F. Kennedy’s famous speech at Rice University in 1962 has been an inspiration to many people. Vintage Space gives some fascinating insight into the full backstory.

Obviously if you’re trying to get to orbit, it helps to have a head start. Next Big Future discusses the advantage of launching from 25 kilometres above sea level.

Centauri Dreams takes an in-depth look at a vital component of any future space travel and colonisation plans – the idea of building closed ecologies.

The Once and Future Moon has a fascinating discussion of “New Space” – free enterprise and the future of the space industry!

Wouldn’t it be nice if we could invent warp engines just like on Star Trek? Next Big Future looks at a quite serious attempt to do the actual science behind warp fields!

Is it feasible to use nuclear fusion as a power source for rockets? Next Big Future investigates…

Urban Astronomer takes a look at one of the coldest places in the Solar System, Neptune’s moon Triton. Could it harbour a subsurface ocean?

The Meridiani Journal discusses martian blueberries – A curious discovery made by the Opportunity rover.

Still on the subject of Mars, Universe Today tells us about some unusual Martian weather in the form of carbon dioxide snow.

Links Through Space talks about having some fun with 3D models of the solar system!

Astroblog shows off some very nice iTelescope observations of the asteroid NEO 2012 QG42 11-09-12.

Here at Supernova Condensate, I marvel at an image of the Sun taken at night, using neutrinos which have passed through our planet.

The Venus Transit tells us all about Voyager’s final image – the humbling and magnificent family portrait of our Solar System! Absolutely beautiful.

A subject rather close to my heart. Was Kepler’s supernova more powerful and more distant than previously thought? The Chandra Blog poses the question… 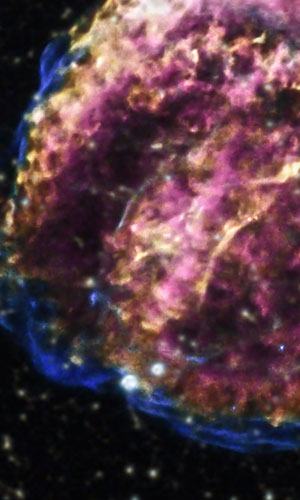 CosmoQuest introduces Science on the Half Sphere – an exciting sounding new science communication project which is soon to be producing full dome planetarium shows for free!

As an astronomer, developing technology to build cheaper space telescopes is always an exciting prospect for me! Next Big Future looks at a technology which could cut the cost of orbital telescopes by hundreds of times!

For even more advanced telescopes, Next Big Future also looks at orbiting rainbows – the decidedly fascinating idea of using a suspended cloud of material in a region of space with negligible gravitational effects as a surface. How? Read on…

And in closing, Doc Madhattan gives a rather nice overview of SETI and SETI@home.

And so, I bid you adieu from another Carnival of Space. I hope you had fun. See you next time!

Are you a space blogger? Do you write about astronomy and the marvels of the cosmos? Would you like to be involved in Carnival of Space? Drop us an e-mail. We’d love to include your blog posts!

8 Responses to Carnival of Space 267