One of the things which particularly caught my eye in this week’s Carnival of Space was that article from the quite marvellous Science in a Can about a singing black hole! 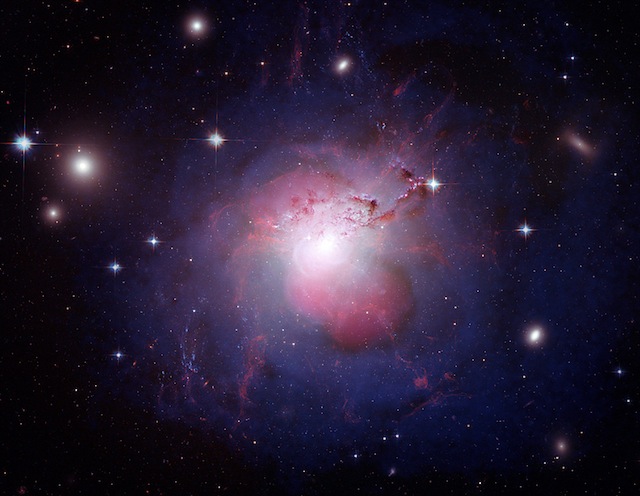 This black hole is about 250 million light years away in the Perseus Cluster of galaxies, and for two and a half billion years, it’s been singing in an ultradeep baritone – a B flat 57 octaves below middle C. Which is really quite a staggering thing to think about. As that black hole feeds, material is shot outwards into space along its polar axis as a pair of relativistic jets. Those jets rip into the surrounding clouds of interstellar stuff and cause vibrations which propagate outwards at the speed of sound. This is the part where most people start to look slightly confused. Sound? In space?

As many of us already know, in space no one can hear you scream. While this may be true, it’s not because there is no sound. Contrary to popular belief, there are indeed soundwaves in space. You can’t hear them though, because human ears don’t work at pressures that low (trust me, you don’t want to find that out first hand). However, a sound wave is simply a longitudinal (compressional) wave propagating through a medium. And the interstellar medium is most certainly a medium. Which is good because if it wasn’t, I wouldn’t have much to put in my thesis.

The sound you hear is carried through the air until it reaches your eardrums. This happens because vibrations in any object cause nearby air molecules to vibrate too. Those vibrations propagate through the air and continue to do so – as soundwaves. Eventually, the soundwaves reach your eardrums, and you hear the sound. In air at the kind of pressures human beings are comfortable in, those soundwaves travel at  343 metres per second (which works out at 1230 km/h). Fast enough that if anything nearby makes a sound, you’ll hear it instantly.

But the speed of sound varies, depending on the medium it’s being carried through. It’s all down to density. In air, it’s 343 m/s. In water, sound carries at 1482 m/s, and in steel, the speed of sound averages 5960 m/s. As you can see from those three numbers, a denser medium carries sound faster. This makes sense, as higher density means more closely packed atoms or molecules, so more chance of them bumping into each other and carrying the soundwave.

In interstellar space, you find the interstellar medium (usually referred to as  the ISM). This is a thin collection of atoms, molecules, electrons, dust grains, and any stray bits and pieces which are lost to space. For example, Earth’s gravity isn’t strong enough to hold helium gas, so helium in the atmosphere is lost into space. The Sun’s solar wind then blows that helium out into the ISM. That helium balloon which burst at your third birthday party? Some of that helium may be in space by now.

In the interstellar medium, the density varies and so does the speed of sound. Basically, the average speed of sound in space is about 100 – 300 kilometres per second! This may be a lot faster than you might expect (especially given the incredibly low density involved!) – but it’s fair for the kind of velocities you’ll find in the ISM. The solar wind which our Sun emits travels at around 300 km/s, and that’s leisurely compared with a bright blue star like Rigel! Other than that, soundwaves in space are exactly the same as soundwaves here on Earth. Stars are even seen to travel at supersonic speeds, causing a huge “bow shock” like LL Orionis to the right, here. Also, apparently dying stars scream in D sharp.

You just can’t hear them, because the pressure is too low. And in the case of that black hole, you can’t hear it because the soundwaves it emits have a frequency interval of about 10 million years – making it slightly below the average human hearing range. Just slightly.

Oh, and by the way, if you don’t read Science in a Can, you really should. It’s one of my favourite blogs!