We are clueless about the future

I just wanted to share this image. Honestly, I kid you not, this is what scientists may once upon a time have expected a “home computer” to look like in the year 2004. As I sit here amidst a heap of cushions typing this on a laptop in the year 2012. Since writing this initially, I’ve now been informed that actually this image is a mockup and not a real prediction from the 1950s, but given the level of technology they had at the time, the points I make in the rest of this post are still valid. 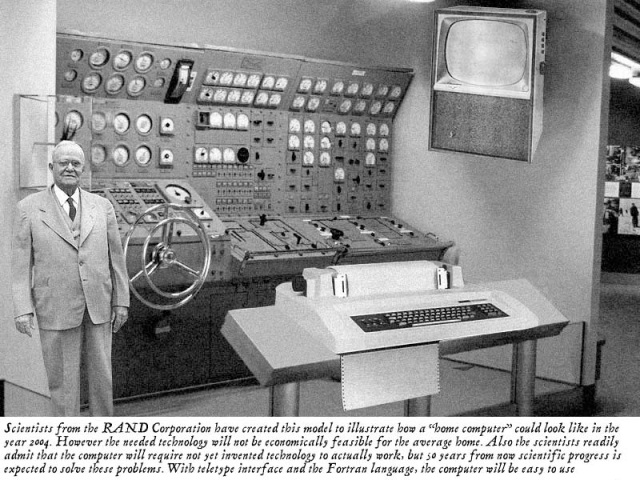 The thing is that obviously those people, nearly 60 years ago, had no clue about what to expect in the future. From their perspective, things like compact disks, retina screens, trackpads and webcams weren’t even considered. Those things were far too unrealistic by the thinking at the time. If you went back in time 60 years and talked about how you could someday own a computer which fits in your pocket, has no buttons, and has more computing power than the whole planet did at the time, you’d just be laughed at. Outright. On the other hand, I’m still waiting for someone to invent me a hoverboard.

The point to this brief tirade is that no matter how we might try, we have no idea what future technology is actually going to be like. We can try and make predictions. But they’ll probably be wrong. Someone will probably invent something which will radically change technology and give rise to something completely unexpected. Or, conversely, they won’t, and something won’t change much at all.

If you ask me, that’s the most exciting part. Let’s just wait and see…

Molecular astrophysicist, usually found writing frenziedly, staring at the sky, or drinking mojitos.
View all posts by Invader Xan →
This entry was posted in Sci Fi, Tech and tagged technology. Bookmark the permalink.

6 Responses to We are clueless about the future