Space battles really are one of the coolest things in sci fi aren’t they? They’re the fast paced sections full of flashy lasers, awesome sound effects, explosions, cool space ships… They also make the scale of things seem that much more epic. After all, you’re in space, fighting against starships which may be kilometres in size, in fleets containing thousands of vessels. The TV Tropes Rule of Cool states that “The limit of the willing suspension of disbelief for a given element is directly proportional to the element’s awesomeness.” And given how awesome the battle scenes in movies are, I usually just throw disbelief completely out of the window. But that said, what might an actual space battle be like? 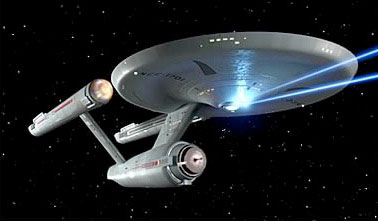 I’m going to say right from the start, that the Space Battle is a huge trope. There’s a lot to cover, and I’m not going to cover it all in a single blog post. For now, I’m just going to cover the basics.

So, for a start, there would be no visible laser beams and no sounds of any kind. In fact, thinking about it scientifically, a space battle would be much more like the Hunt for Red October than anything you’d see in Star Wars. In space, it would be all about range – by which I don’t mean the range of your weapons, I mean the range of your eyes. Or more accurately, your sensors. You’d be taking careful aim at your opponent long before you could actually see them. With any luck, you’d be doing so long before they even knew you were there.

So let’s suppose, hypothetically speaking, that you had two space ships going toe to toe in a real life space battle scenario. And purely for the hell of it, let’s say that those two space ships are the Starship Enterprise (the original) and the Millennium Falcon. Let’s look at the numbers… Though I know someone out there will end up correcting me on this, the original Enterprise has a saucer with a diameter of 127.8 m, and the dimensions of the Millennium Falcon are a rather more modest 34.37 m in length by 26.21 m breadth.  For a start, this means that the Enterprise is a hugely bigger target, making it a lot easier to hit. But you’d need to be close enough to see it first.

So let’s assume that our starships have scanners with an angular resolution of 0.1″ (that’s 0.1 arcseconds) which, by modern standards, is a pretty good resolution for a decent sized telescope. In order to fire at a target, you’d need to be able to resolve it – that is, you’d need to be able to see it as more than just a distant point of light. Once you can resolve its actual shape, you can begin to take aim. Before that, the margin of error would be too high and it wouldn’t be worth the waste of energy aiming at a target which you would probably miss. Throwing in the numbers and sparing you the trigonometry… Seen from the Enterprise, you’d start to be able to resolve the Falcon’s shape when it was 1227.5 km away. Unfortunately, the Enterprise is at a serious disadvantage because with it’s much larger size, the Falcon would be able to resolve it when it was 4564.2 km away! By the time the Enterprise was close enough to attack the Falcon, chances are the Falcon would have taken several shots at the Enterprise, perhaps inflicting some serious damage on it. Interestingly, this has the effect of leveling the playing field rather effectively. A larger ship with more armour and more firepower would take a lot longer to be able to target a smaller vessel. In fact, it could be possible for a smaller ship to cripple a larger ship before they could even be resolved. Of course, on the other hand, a larger ship would be able to have larger telescopes and so have a correspondingly more powerful resolution (or in non-technical terms, it could be able to see you from further away). 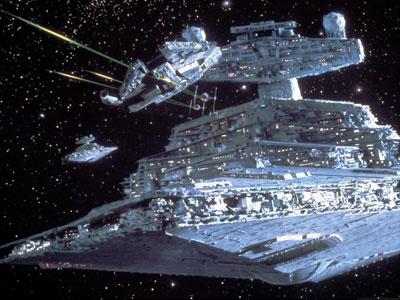 Chances are, the crew of a battleship would need to be pretty good astronomers, and their ships would need to be equipped with several telescopes, covering different wavelengths. Then the crew would need to look at images and data from those wavelengths and rapidly figure out whether or not it was their target. Ships could also attempt to disguise themselves by reducing their ship’s reflectiveness (again, a bright white Enterprise would be extremely easy to spot), but they’d likely be very bright in the infrared – no air cooling in space means excess heat created by the ship’s engines and machinery would need to be radiated away into space. So any object which was peculiarly bright in the infrared could be another ship. Looking at the spectrum of an object can tell astronomers the difference between different kinds of asteroid. In the midst of a space battle, it would probably let a ships crew determine whether or not it was a ship they were looking at, and possibly say a little about what kind of ship it was. And thankfully for our protagonists, photometric and spectroscopic analyses like this could be quite safely done while still out of range.

But how would you know the range? Distance is notoriously hard to measure in space. Radar would still be quite effective in determining your distance to any nearby objects… But it would also give away your position.

A trope is a recurring theme in any narrative which conveys information to the audience. These are snippets of information which have somehow ended up in our collective subconscious as ways in which storytellers have gotten their points across. Overused tropes end up as clichés.