I have no words to use in explaining the thoughts that ran through my head upon realisation that the results for what may well be one of the greatest discoveries in modern physics were presented using the font Comic Sans. To anyone with even a faint inclination towards typography, I don’t think I need say more. 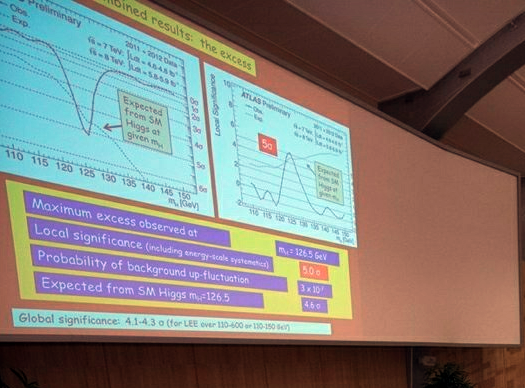 To anyone else however, I’m just going to copy and paste a rant I wrote elsewhere on the web a few weeks ago, because I’m tired of saying this…

It’s not just that it’s bad. It’s the widespread extent of its use. It’s that you can’t ignore it because it’s everywhere you look. Look on any street. There will be a sign in a shop window in Comic Sans. Look in any newspaper. At least one advert will use it. I’ve seen it in lecture handouts, on TV, in magazines… Hell, I’ve seen it used in scientific presentations at international conferences! That just isn’t right!

Really, it’s not that it’s bad – It’s that it’s awful. The other fonts that designers grumble about are actually really good by comparison. Copperplate Gothic… Brush Script… Even Papyrus. At least they obey the basic rules of typography. All the stems, loops, tails, bowls… They’re all consistent. I don’t like Papyrus at all, but at least it’s well constructed. Comic Sans has no such consistency. I won’t even go into detail on why it’s a typographer’s nightmare. I’ll just draw your attention to three things which you’ll never be able to un-see. The pointless serif-like thing on the uppercase C (absent in all other uppercase chracters). The weird overhang on the lowercase r. The ugliest lowercase s in existence.

Honestly, I wouldn’t mind if it was any one of the several million other comic-book-marker-pen type fonts out there. It’s just that for unknown reasons everyone uses the ugliest one in existence!

Seriously, if you want to use a comic book style font, for whatever reason, there are literally hundreds freely available on the web (maybe several million was a slight exaggeration). I’m not even sure why you’d want your serious work to resemble something which might be written by a zealous child with a marker pen, frankly. But if you use this font, I’m not the only person who’ll suddenly be unable to take you seriously.

I mean, what kind of person would think that Comic Sans is even remotely appropriate to use in a presentation?

I’m totally printing some of these stickers
and taking them to conferences in future.
Just in case.

Molecular astrophysicist, usually found writing frenziedly, staring at the sky, or drinking mojitos.
View all posts by Invader Xan →
This entry was posted in unassigned and tagged graphic design. Bookmark the permalink.