Lots of people, scientists and writers of fiction, have hypothesised what life on another world may be like. Indeed, with the idea that a world like Europa may have a hidden ocean locked inside its icy shell, it’s all too tempting to try and imagine what may be out there, lying in wait for us to find it. But the real question is, is our imagination really potent enough to give us a good idea? Even here on Earth, life throws us constant surprises. Even assuming that life elsewhere in the Universe uses the same chemistry as us, with DNA to encode its genetic information, it could be very different to what we’re familiar with. A good way to see this is to look back in time about half a billion years… 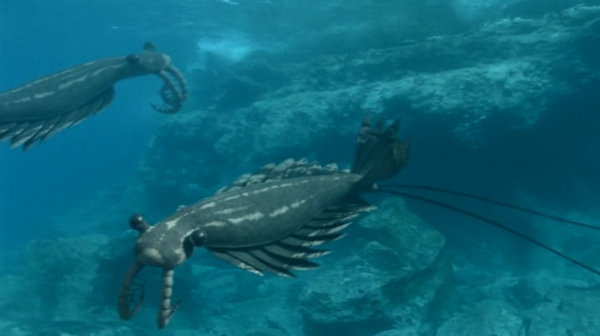 This is anomalocaris. At least 515 million years ago, in Earth’s shallow Cambrian seas, anomalocaris was the king. Earth’s first super predator, it used complex eyes to scour the seas for prey, probably picking off trilobites and other primitive Earth creatures from the sea floor. If anomalocaris looks strange, that’s because by modern standards, it was. There are actually no surviving members of this particular branch of the evolutionary tree remaining on Earth, though anomalocaris and its kin were probably among the earliest of Earth’s arthropod species – a group of creatures which would evolve into the insects and spiders and crustaceans we’re more familiar with today. Despite knowing that it was a hunter and that it grew to somewhere between one and two metres in size, we really don’t know that much about this ancient beast, and the debates are still raging on about how precisely it would have lived its life. Suffice to say that if life on Earth was so drastically different half a billion years ago, despite being powered by all the same chemistry, what would life elsewhere be like? I don’t think we’re really able to even guess.

Interestingly though, life is likely to share some common traits elsewhere. Convergent evolution means that life often takes different roads to the same conclusion. Wings, for instance, have evolved several times over the course of Earth’s history. There are subtle differences, of course, but the end result is always the same – a very similar body structure to perform a very similar purpose.

Even a strange beast like anomalocaris seems to have had others follow its footsteps. You could probably get a good impression of how creatures like anomalocaris moved and behaved by watching modern day brine shrimp. Like the ones I was talking about before, which are currently residing in a small bottle on my desk here. There’s even a giant species called branchinecta gigas, which can grow to several centimetres in length, and likes to hunt smaller aquatic creatures. If there’s any way to accomplish anything in the world, it seems likely that life has already found it. Probably quite a few times.

Top image screen-captured from the BBC series Walking with Monsters.

Molecular astrophysicist, usually found writing frenziedly, staring at the sky, or drinking mojitos.
View all posts by Invader Xan →
This entry was posted in astrobiology and tagged biology. Bookmark the permalink.