I have some new pets. Quite a multitude of them, actually. In fact, easily over a hundred. Good thing they’re all under a centimetre in size!

Brine shrimp are pretty amazing little things. You might know them better as sea monkeys, though precisely why they got that name is anyone’s guess. These fantastic wee beasts aren’t true shrimp, but belong to a primitive group of crustaceans known as branchiopods – so called because they “breathe” with their feet. A set of constantly undulating legs flank their miniscule bodies, and gills on these legs absorb oxygen from the water as they swim. All branchiopods have scarcely changed since the triassic period on Earth, meaning that as a species, they may well outdate flowering plants. A fellow branchiopod also sometimes kept as a pet is the triops, a living fossil which is virtually unchanged since jurassic times, and with fossils of its genus found dating back to the carboniferous period. 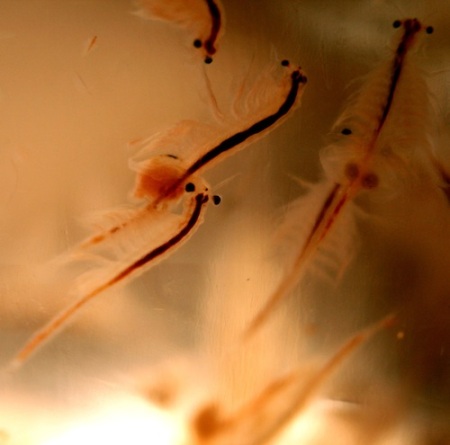 Brine shrimp get their name because they inhabit some of the saltiest environments on Earth. Inland salt lakes and pools which get little rain. Adaptable enough to tolerate a wide range of salt concentrations, including levels high enough to qualify these little invertebrates as extremophiles. They evolved the ability to tolerate conditions like these in order to evade predators, which are incapable of surviving such high salt levels. Which is a brilliant feat of nature really.

But by far the most interesting thing about these creatures is their ability to enter a state called cryptobiosis. When they lay their eggs (which they do every 140 hours or so) those eggs don’t always hatch immediately. You see, the salt pools which brine shrimp inhabit aren’t permanent. In normally arid, desert-like conditions, these pools frequently dry out – which causes an increase in the salt concentration in the pools, sending a biological alert to the shrimp. When this happens, newly laid eggs won’t hatch immediately. Instead, they’ll enter a dormant phase – cryptobiosis. In cryptobiosis, the brine shrimp eggs are capable of withstanding some truly remarkable extremes of climate. Dormant eggs (referred to as cysts) can survive temperatures as low as liquid nitrogen and as high as boiling water. In their dormant state they lie waiting, perhaps for years, for the right conditions in which to hatch. As soon as those conditions are met, the eggs hatch rapidly. As soon as the rains fall on the salt plains, the brine shrimp hatch and within days they reclaim the ephemeral pools which they call home.

Image credit: Michelle Jo @ Wikimedia Commons
(These little guys are way too small for me to photograph with a phone camera!)

Molecular astrophysicist, usually found writing frenziedly, staring at the sky, or drinking mojitos.
View all posts by Invader Xan →
This entry was posted in unassigned and tagged biology. Bookmark the permalink.