How to diffract a Cadbury’s creme egg…?

It’s quite easy to talk me into doing silly things. Actually, if I’m honest, it’s very easy. Especially if those silly things are entertaining and tenuously scientific. For instance, I’m writing this because of a conversation (with certain people) about diffracting Cadbury’s creme eggs. There’s… not a lot more I can say about that really. (I don’t know how these things happen, they just do).

Now, when dealing with subatomic particles, any particle of matter actually exhibits wave-particle duality. Confusingly, matter can act like energy and energy can act like matter. Particles act like waves, act like particles, act like waves. It’s bizarro concepts like that which, quite frankly, make me love quantum mechanics. But In theory, this can carry on right the way up to the macroscopic scale.

The photograph here shows my scrawl of the De Broglie equation. The right hand term is a little correction if you’re dealing with relativistic velocities (that is, significant amounts of the speed of light). We can simplify things here by ignoring that, because at lower velocities, the whole term (root one minus v2 over c2) is essentially equal to 1. So it simply comes down to Planck’s constant, divided by mass times velocity. Well, I say simply…

So just suppose I was to throw a creme egg at you. A tasty chocolatey treat, filled with gooey sickly fondant, weighing about 39g (incidentally, the ones they sell in the US are apparently slightly lighter). Assuming I threw it at a reasonable speed of about 100 ms-1 (metres per second) — ignore the speed of sound in that photograph, by the way. That’s just silly. It would have a De Broglie wavelength of about 1.7×10-34 m. Oh dear. That’s only slightly larger than the Planck length (effectively the smallest anything can be). That egg might diffract a very tiny amount at very small scales (if there’s even anything small enough to diffract around). But it won’t diffract around your head. Effectively, the creme egg I pelt you with won’t diffract at all. Errr… sorry about that. 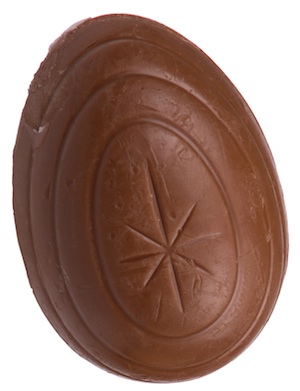 You might think that something might diffract if you throw it faster, but actually it doesn’t work that way. Counter intuitively, the equation shows an inversely proportional relationship — in other words, the higher the mass and/or velocity, the smaller the wavelength. Subatomic particles can diffract only because they’re very very small. For macroscopic matter to diffract, it needs to travel very very slowly. So let’s crunch some numbers, shall we?

How about 400 nanometres per second (400nm is the wavelength of violet light). That gives us a wavelength of 4.27×10-26 metres. We’re not exactly making progress, are we? So how about if we move our creme egg at 1.1×10-15 ms-1? That’s the radius of one neutron every second. It’s safe to say by now that that’s an imperceptibly small velocity, but that would get us a wavelength of 1.54×10-17 m. I’m pretty sure by now, we’re down to scales which have no real names, and it’s all getting a but strange and abstract.

Nah. I’ve got nothing this time. Sorry.

1 Response to How to diffract a Cadbury’s creme egg…?