This is perhaps one of the most beautiful eclipse pictures I’ve ever seen. Seriously. It’s just incredible. The detail is breathtaking. The composition is exquisite. It’s been circulating the internet for the past day or so with people saying that it’s a NASA photograph of yesterday’s eclipse, taken from orbit. In a way, it’s a pity it’s not a real photograph. 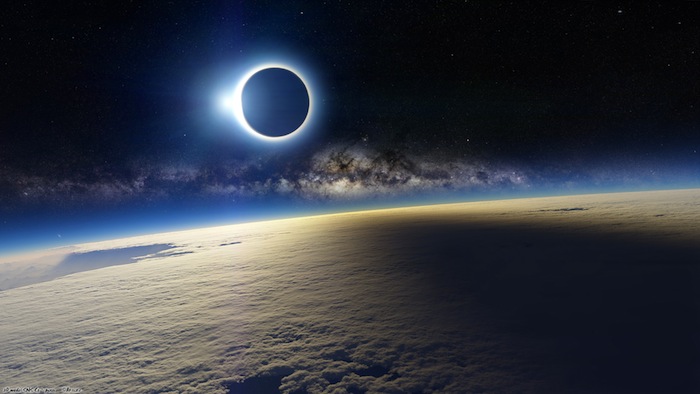 No, this incredible image is actually a 3D rendering. It’s by a Japanese artist who goes by the name of A4size-ska on deviantART, and he’s the guy who deserves credit for this. I’ll admit that at first glance it even had me fooled, but as someone who likes to make artists impressions of things, a few things gave it away as not being real. The only real part is the Milky Way in the background.

That said, I’m not for one second going to say a word against this image. The textures and colours are brilliant. It is, as far as I can see, a perfect representation of how an eclipse actually could look from orbit (with the exception of the galaxy in the background, but artistically I think that’s a nice touch!). A4size-ska created this gorgeous work using Terragen 2, and it took him 38 hours to render. He deserves everyone reading this to go to his gallery right now and be in awe of all the other amazing things he’s created! Trust me, if you like this image, you won’t be disappointed!

Molecular astrophysicist, usually found writing frenziedly, staring at the sky, or drinking mojitos.
View all posts by Invader Xan →
This entry was posted in art, Imported from Livejournal and tagged art, earth, the moon, the sun. Bookmark the permalink.
%d bloggers like this: