If there’s one place in the world where robots are likely to be able to coexist with humans in the forseeable future, it has to be Japan. I have a kind of awestruck admiration for the Japanese love of technology. It’s not just a love, but seemingly a willingness to welcome it into their culture. Perhaps the most iconic representation of that is this loveable little guy. In case you’ve somehow not heard of him, this is ASIMO.

With the similarity to the name of Isaac Asimov being a remarkable coincidence, ASIMO stands for Advanced Step in Innovative Mobility, and it’s possibly the most advanced bipedal robot in the world. Admittedly, it’s still not without it’s shortcomings. In fact, a friend of mine (who actually works in robotics) once derisively explained all of the reasons why ASIMO isn’t really much good yet. Seemingly though, Honda are gradually working to fix those shortcomings.

As of November last year, this is the latest model of ASIMO. And apparently it’s now a fair bit smarter. The newest ASIMO is now able to better handle uneven surfaces, and now as well as having the ability to do things like stepping to one side to allow humans to pass (showing respect is very important in Japan, after all), ASIMO is able to actually move autonomously (as opposed to being the world’s most expensive remote controlled toy). I’d imagine it still has a way to go, but it’s getting better. And let’s face it, all of us remember watching Star Wars (or whatever other sci-fi film has robots in it) for the first time and wondering if someday robots might wander the streets the way people do.★

I have a feeling we may be at least a decade away from robots like ASIMO being available for consumers to buy, and even then I’d imagine they’re going to be recommended for indoor use only. While they may have given ASIMO enough sense to charge its own batteries when they start to run down, there is still the rather significant problem that those batteries only last for an hour. No treks across the deserts of Tattooine for this droid, then. At least not yet. What’s more, most importantly are things like reactions and rapid movements. When you can give an ASIMO robot a push, and the robot is able to stumble, find its balance, and not fall over — that will be when we’re likely to see robots acting as members of society. Or alternatively, imagine if you will, the potential for sending small groups of androids to explore other planets…

For the meantime, let’s be honest, even if they’re still essentially a technological curiosity, they are rather cute. Testament to the level of affection that I’m probably not alone in feeling towards little androids like this is the fact that all the while I’ve been writing this, I’ve had to keep stopping myself from giving this robot human pronouns. But then, perhaps that isn’t such a bad thing. Maybe someday, treating robots entirely like people won’t be unusual at all. Perhaps robots really will be our friends. 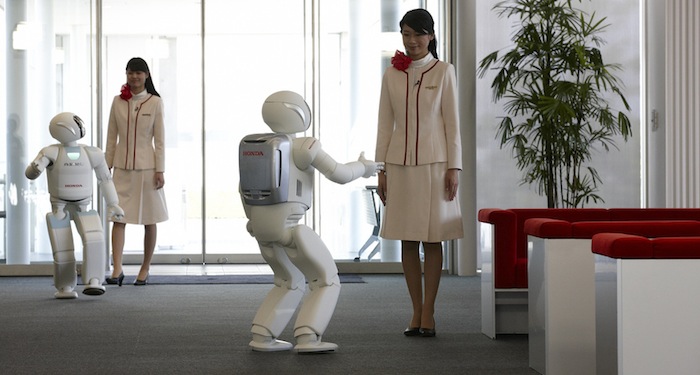 Both images and source are courtesy of the Honda News photostream on flickr, where you’ll find lots more robotic photographs!

★ Wait, what do you mean ‘no you didn’t’? Really? You mean that was just me? Again? Oh god dammit!

…in all seriousness though, Honda have been building robots since the 1980s. And some of them looked decidedly Star Wars-esque. Personally, I rather like the fact that a large company like Honda funds actual research into things.

Molecular astrophysicist, usually found writing frenziedly, staring at the sky, or drinking mojitos.
View all posts by Invader Xan →
This entry was posted in Imported from Livejournal, Sci Fi and tagged robots, technology. Bookmark the permalink.
%d bloggers like this: