So the Pioneer anomaly appears to have finally been solved (I do enjoy a good anomaly). And it really isn’t so anomalous after all. As it happens, there were no unexpected breakdowns of gravitational physics or bizarre outer solar system phenomena. The only thing there was simple heat. Heat in a very cold environment. 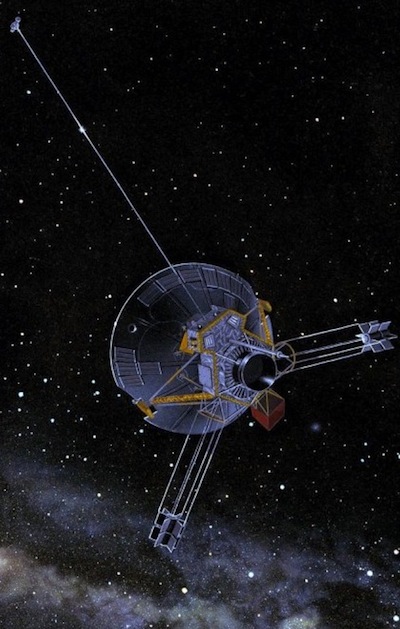 It was noticed in 1980, that the Pioneer craft weren’t quite acting as expected. Calculations showed the craft were deviating from their expected positions. Not by much★. The effect was around 10 billion times less than the effects of gravity out in the dark outer reaches of the solar system, but the effect was noticeable all the same. Basically, Pioneer is heading out of the solar system with that big dish still pointing back towards Earth, from when it used to call home regularly♣. The craft is also still generating heat. Pioneer’s power source as it strays into the darkness is a little piece of Plutonium. The thermocouples in Pioneer which turn heat energy into electricity have degraded gradually over time, and they’re not so efficient anymore. This means that Pioneer is gradually radiating more and more heat outwards away from the solar system, and in the opposite direction to the way it’s travelling. It isn’t radiating any heat back in the direction it came from, because that big dish is blocking it, and any heat which radiates back is actually reflected off the dish, adding to the effect. Heat being emitted actually causes a tiny amount of force (the same thing that makes a toy light mill rotate). It’s so tiny that you’d never ever notice it — unless you were millions of miles from anywhere in deep cold space, like Pioneer is.

Essentially, Pioneer is quite an old piece of electronics. How many pieces of electronic equipment from the 1970s do you know of that are still working properly? I’d be willing to bet, not very many. So the culprit was heat all along. After all of the debates, hypotheses, disproved calculations, and conjecture… simple radiation pressure, nothing more.

Incidentally, to clarify, I say “finally solved” while Reddit seems to be full of people talking about how “This has been known for some time now… like years…” The trouble is, that is science, you can’t just say something is true. You need to prove it. From what I know, it wasn’t really quite so simple (is it ever?). The whole saga is unfurled rather nicely by Jennifer Ouellette on Discovery News.

Molecular astrophysicist, usually found writing frenziedly, staring at the sky, or drinking mojitos.
View all posts by Invader Xan →
This entry was posted in Imported from Livejournal, physics and tagged space exploration. Bookmark the permalink.