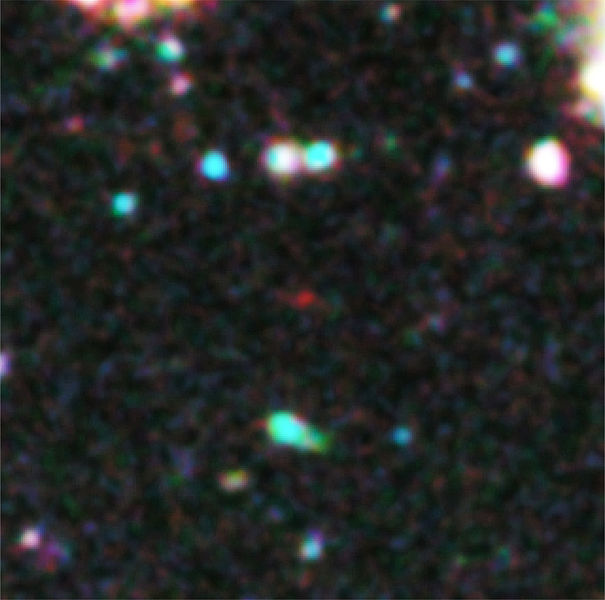 Have a look at the very centre of this image, and tell me what you see. A small red dot, perhaps. Nothing wildly exciting. But that would be a horrible underestimation of this particular red dot. You see, this red dot is actually a galaxy called UDFj-39546284. The light from this galaxy, over a quadrillion times too faint to be seen by human eyes alone, has been travelling for 13.2 billion years to reach us, meaning we’re looking back into the dim and distant past of the Universe when we look at this dot. This is the most far away place anyone has ever seen.

The red dot we see here comes from a time when the mightiest galaxies were still forming. When the earliest stars were still being born. From a time long before the Earth and the Sun had even begin to form. From a time before the carbon in our bodies, the calcium in our bones and the iron in our blood had even been created yet. Nor had the star which created them been formed. From a time when the Universe itself was a lot smaller, and the vastness of intergalactic space wasn’t quite so vast or empty. The Milky Way galaxy itself was still forming back then, forming stars the way clouds form raindrops. It was probably a lot like this red dot, probably still taking in gas from the surrounding intergalactic space to fuel the formation of more stars. The early Universe was blossoming between 480 million and 650 million years after the big bang, and any planets which could have existed back in those early days would have seen stars gradually filling their primordial skies, illuminating the gas clouds that filled the Universe. Only a few tens of millions of years before this, there were no stars yet at all, and the Universe contained nothing but dark and silent clouds of hydrogen and helium.

This red dot, with a redshift of over 10, is actually a huge bundle of hot, bright blue stars. They only look so deep red because they’re so unspeakably distant that their light has been stretched by the expansion of the Universe itself. 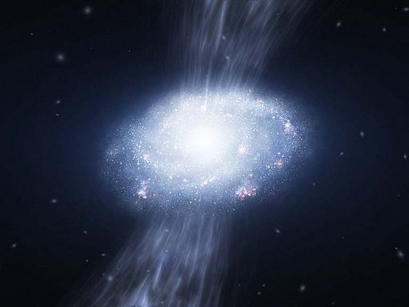 Molecular astrophysicist, usually found writing frenziedly, staring at the sky, or drinking mojitos.
View all posts by Invader Xan →
This entry was posted in Imported from Livejournal and tagged cosmology, galaxies. Bookmark the permalink.
%d bloggers like this: